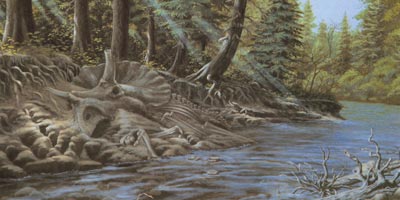 Triceratops skeleton on the river's edge
Chicago Academy of Sciences

The term fossilized is important. It is not the dinosaur bones themselves that paleontologists find, but their stony replicas. Fossil bones are created by the slow replacement of bone molecules with the molecules of minerals in ground water. This process sometimes preserves even the delicate cell structure of the bones. Other times the bones dissolve completely and only their imprint is left on the rocks.

Teeth and bones are the most durable parts of a vertebrate's body. They may survive long after the animal's soft parts have rotted or been eaten. Except for fossilized footprints, skeletal remains are the most common fossils. Unfortunately, few animals ever become fossilized, compared to the millions that lived.

Animals seldom die where they can be fossilized. A recently deceased animal that remains above ground will be dissolved by the chemicals in soil and converted into plant food. This is why the bodies of even large animals are seldom found in the woods-and why fossils are most often found in deserts and other "bone-dry" places where there are not many plants.

In order for a skeleton to become a fossil, a layer of sediment must quickly cover the body. This prevents the skeleton from being destroyed by other animals or nature. Over the following thousands and millions of years, this sediment hardens into a protective layer of rock, such as shale, siltstone, mudstone, or sandstone.

Dinosaur bones could have been covered by sediment in still water, such as at the bottoms of lakes, slow-moving rivers and river deltas, shallow seas, and seacoasts. The sediment could also have been brought by the air, such as sand from dust storms or volcanic ash falls. The places where conditions are right for skeletons to become fossils are only a small percentage of the world's land area at any time. Many species of dinosaurs lived where no fossils could form. Partly for this reason, there are many evolutionary "missing links" between groups of dinosaurs. So there is an incomplete picture of dinosaurs from the fossil record.