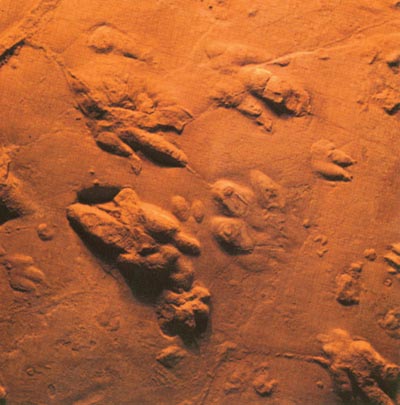 Fossilized dinosaur footprints are more common than dinosaur skeletal remains. This is not surprising because each dinosaur could have left hundreds of thousands of prints over its lifetime. Unfortunately, footprints give few details about what the dinosaur looked like and what species it belonged to, though the skin texture of the soles of its feet is sometimes imprinted. The tracks can tell us an enormous amount about how the trackmakers walked, cruised, ran, sprinted, and even swam.

We know from their footprints, for example, that large theropod dinosaurs either roamed by themselves or in small groups. Smaller dinosaurs, both plant-eaters and meat-eaters, often gathered in herds that left many directionless footprints. Large sauropods also probably lived in herds. After more study by paleontologists, trackways may show that dinosaurs migrated along thousand-mile-long "highways" in search of food.

By measuring stride lengths and footprint sizes, and comparing them with modern animals, it is possible to estimate how fast dinosaurs walked and ran. Typical walking speeds were about four or five miles per hour, though large sauropods may have walked two or three miles per hour. Since animals do not run at top speed for any length of time, tracks of fast-running dinosaurs are rare. Estimated theropod speeds may be more than 30 miles per hour, and ornithomimids may have been faster than ostriches.