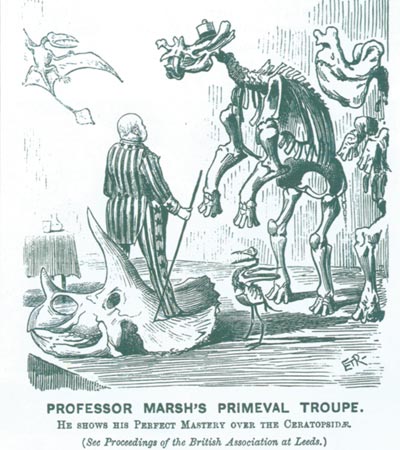 In 1855, Ferdinand Vandiveer Hayden, a surveyor for the U.S. Geological Survey, took fossil teeth and other remains that he had found along the Judith River in Montana to Philadelphia. A year later, Joseph Leidy published his work on Troodon, Palaeoscincus, Trachodon, Thespesius, and Deinodon. He did not consider all of them to be dinosaurs.

Two years later, William Parker Foulke made an amazing discovery while vacationing in Haddonfield, New Jersey. John E. Hopkins had found some large vertebrae on his property two decades before. Souvenir hunters had carried off many of the bones, but Foulke and his workers found the rest of the skeleton. Leidy described the headless specimen as a new dinosaur, Hadrosaurus foulkii. It was the first dinosaur skeleton found in North America and one of the best found anywhere up to that time.

In the late 1860s, two scientists took the spotlight. Their rivalry has become legend. Othniel Charles Marsh, nephew of multimillionaire George Peabody, was a Yale University graduate. He persuaded his uncle to finance the Peabody Museum at Yale, which supported his field work.

Edward Drinker Cope grew up a Quaker in Philadelphia. He was a child prodigy, who, by age 18, had published his first scientific paper. Cope was wealthy and he later inherited a small fortune that allowed him to pursue his studies.

Cope and Marsh's rivalry grew out of their ambition to be the greatest paleontologist. By 1866, Cope had described his first dinosaur, the meat-eating Laelaps aquilunguis. Marsh had not yet described a dinosaur. He pointed out errors in Cope's 1868 description of the aquatic reptile from Kansas, Elasmosaurus. Embarrassed, Cope tried to buy all the copies of his article, but Marsh kept several copies. Cope never forgot the insult.

Schoolmaster Arthur Lakes came across fossil bones in Morrison, Colorado, in 1877. He sent fossils to both Marsh and Cope. Marsh immediately secured rights and began digging. Fortunately for Cope, another schoolmaster found bigger bones near Cañon City, Colorado. Later that summer, two employees of the Union Pacific Railroad located some well-preserved bones at Como Bluff, Wyoming. Marsh sent his field man to supervise the excavation. These three locations fostered a revolution in our understanding of dinosaurs.

Marsh's and Cope's ambition to be the first to describe the largest and most spectacular fossils started the "dinosaur rush" that lasted for a decade. They hired teams of men to find new locations, to dig for dinosaurs, and to send bones to New Haven and Philadelphia for description. Each scrambled to be the first in print with new dinosaurs. As a result, many dinosaurs received two or more names. For example, Marsh described Apatosaurus in 1877 and Brontosaurus in 1879. Because they are the same animal, the older name has priority.

Cope died in 1897, and Marsh in 1899. After the smoke cleared, Marsh had described more dinosaurs than Cope. Cope's interests in paleontology were wider than Marsh's, though, and he made the greater contribution. The techniques of prospecting, recording, excavating, and shipping large fossils are perhaps the two scientists' greatest legacy.

Henry Fairfield Osborn had just graduated from Princeton University when news of Marsh's expeditions inspired him to organize an expedition to Wyoming. He gained little but experience. Later he worked with Cope, where he picked up knowledge of vertebrate anatomy and paleontology. Osborn then worked at the American Museum of Natural History.

The size and appearance of dinosaurs impressed Osborn. He realized that they also fascinated the general public. Using his connections, he secured funding to find, prepare, and display dinosaur skeletons. By 1940, the American Museum had the greatest collection of dinosaurs on display.

As the 19th century was ending, Andrew Carnegie endowed a large natural history museum in Pittsburgh. After reading about the American Museum's discoveries, he instructed William J. Holland, the museum director, to find dinosaurs to exhibit. Museum employees Jacob Wortman and Arthur S. Coggeshall found a huge partial dinosaur skeleton at Sheep Creek, Wyoming. They unearthed another of the same species nearby. Together with bones from related dinosaurs, workers made the two into a spectacular 84-foot-long mounted skeleton that Holland named Diplodocus carnegii.

Earl Douglass went to work for the Carnegie Museum. Prospecting in the Uinta Basin near Vernal, Utah, in 1908, he and Holland found a Diplodocus thigh bone. Douglass returned the following year and discovered the giant skeleton (over 70 feet long) that Holland named Apatosaurus louisae, in honor of Carnegie's wife. That skeleton proved to be the "tip of the iceberg" of dinosaur fossils. With Carnegie's support, Douglass started a large excavation that produced thousands of dinosaur bones. President Woodrow Wilson designated the quarry Dinosaur National Monument in 1915, and excavations continue even today.