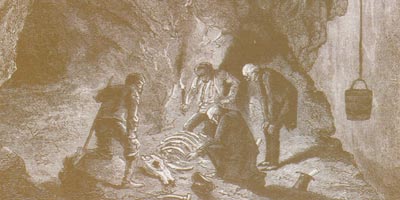 In 1878, the feud between Cope and Marsh was getting into full swing. Meanwhile, coal miners at Bernissart, Belgium, discovered well-preserved dinosaur skeletons over a thousand feet beneath the ground. Soon the mining company Charbonnage de Bernissart diverted its resources to excavating the skeletons, a task that took several years.

One colorful character was Franz Baron Nopcsa von Felsö-Szilvás, a Transylvanian nobleman. He became intrigued with dinosaurs when his sister chanced upon some bones on her property in what is now Hungary. He published a scientific description of the new dinosaur in 1899, as a first-year student at the University of Vienna.

Much of Nopcsa's work was to describe the dinosaurs of central Europe, which we know from many pieces of fossils. He also speculated-sometimes outlandishly-about dinosaur origins, classification, and lifestyle. Other scientists quickly discredited his idea that the crested duckbilled dinosaurs were males and the flat-headed ones females. Scientists today accept a modern version of his hypothesis: that the sizes and shapes of the crests of duckbilled dinosaurs suggest the animal's maturity.

Europe's premier vertebrate paleontologist at that time was Friedrich Freiherr von Huene. Like Nopcsa, Huene was a nobleman-with the time and means to pursue a university education. At the University of Tübingen, he began his long career with a study of the Triassic dinosaurs of Germany. When workers found dinosaur bones at Trossingen, Huene investigated. The excavations uncovered an enormous bed of Plateosaurus bones. This animal lived during the Late Triassic.