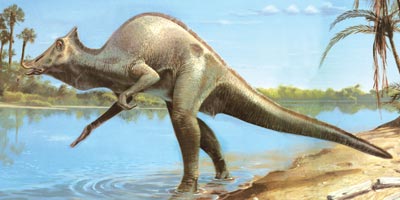 These duckbilled dinosaurs, named Saurolophus, enjoy the shade and water on a warm Late Cretaceous day.
Canadian Museum of Nature

The Canadian dinosaur rush was ending. Meanwhile, Henry Fairfield Osborn decided the place to look for fossil mammals and the origins of the human race was in the Gobi Desert. The American Museum of Natural History sent expeditions led by Roy Chapman Andrews and Walter Granger to the Gobi. They first set out in 1922, but they did not find human remains. Instead, the prospectors found ancient mammal bones, and in one place, dinosaur bones. Heartened by these discoveries, the expedition returned in 1923. At Shabarakh Usu (now called Bayn Dzak), they identified the first dinosaur eggs ever found, many still arranged in nests. Workers also unearthed skeletons of Protoceratops andrewsi, the dinosaur that laid the eggs. There were skeletons from hatchling to adult. They found many other new dinosaurs on that and later expeditions to the Gobi.

During the 1930s, political turmoil in China prevented further exploration of the Gobi Desert. After World War II, paleontologists from the Soviet Union, led by Ivan Antonovich Efremov, found many fossils in the Nemegt Basin. The huge meat-eater Tarbosaurus bataar and the giant plant-eater Saurolophus angustirostris were two new finds. These animals were closely related to North American dinosaurs Tyrannosaurus rex and Saurolophus osborni. This suggests that during the Late Cretaceous, a strip of land joined western North America and eastern Asia. There also could have been a group of islands between the two continents. Dinosaurs and other animals may have been able to roam between these areas.

In 1902, a Russian colonel named Manakin found the first dinosaurs from China along the Chinese bank of the Amur River (this river forms part of the boundary between Russia and China). In 1915, A. N. Kryshtofovitch and V. P. Renngarten led expeditions to the region. The first named dinosaur from China, Mandschurosaurus amurensis, was mounted in Leningrad.

Meanwhile, American paleontologist G. D. Louderback had unearthed dinosaur remains in the Sichuan Basin of southwestern China in 1913. That same year, missionary R. Mertens found a large partial skeleton in the Shandong Province. Otto Zdansky and Tan Xichou excavated the site in 1922. The well-preserved remains of a long-necked plant-eating dinosaur, Euhelopus zdanskyi, went to the University of Uppsala, Sweden, for examination.

China and Sweden sponsored the Sino-Swedish Northwest China Expeditions of 1927-31, led by Swedish geographer Sven Hedin and Chinese geologist F. Yuan. In 1953, Birger Bohlin wrote about some of the dinosaurs discovered during those expeditions, though many were only fragmentary remains.

China's foremost paleontologist from the 1930s until his death in 1979, Young Chung Chien studied vertebrate paleontology under Huene in Germany. On returning to China in 1928, he worked for the Geological Survey of China, starting excavations for fossil reptiles in several places. Young wrote up and supervised the mounting of Lufengosaurus, discovered in Yunnan Province at Lufeng. It was the first mounted dinosaur skeleton displayed in China. After the Chinese revolution, Young founded the Institute of Vertebrate Paleontology and Paleoanthropology. This institute supported the excavation and study of many dinosaurs and other fossils. It was almost entirely through the work of Young and his students that China became one of the centers of dinosaur research.