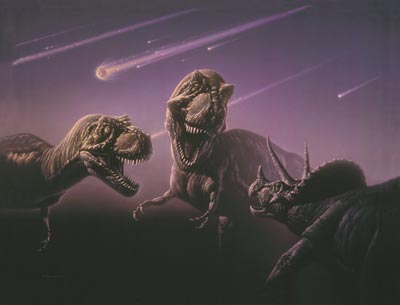 The distant thundering sounds signal the arrival of some of the largest animals ever to have roamed the earth. A herd of Brachiosaurus arrive to trample every plant they don't eat. The sounds also let an Allosaurus know that its next meal could be arriving. Though Allosaurus has no chance of catching and killing a healthy adult Brachiosaurus, it could try to separate a young or sick member from the herd.

It isn't hard to imagine this scene even though dinosaurs haven't walked the earth for millions of years. Dinosaurs have captured our imaginations. The Encyclopedia of Dinosaurs has been written to lead you into the exciting world of dinosaur research and back to the "Age of Dinosaurs." So start your adventure at the beginning of the book when humans first found dinosaur bones.

Get to know the dinosaurs of the different periods

Early discoveries of dinosaur bones were baffling and probably inspired the legends of dragons. But by the 1800s, paleontology was beginning to be a science. Find out how explorers came to believe that dinosaurs existed and their early ideas about dinosaurs. The trail leading to our present knowledge of dinosaurs was paved by dedicated scientists and explorers.

Dinosaurs pose a special problem for scientists who classify them. With little information and few animals represented, trying to find clues about the dinosaur family tree has turned taxonomists into detectives. Learn what makes dinosaurs different from other reptiles and what makes them similar. A complete, updated, easy-to-follow classification chart is included.

Even though there are few fossils, paleontologists can learn much about dinosaur behavior. The study of these fossils is an important and interesting science. Find out what we know about the lifestyle, behavior, and appearance of dinosaurs. Many dinosaurs were complex creatures.

After learning about the background and history of dinosaurs, you will be introduced to more than 140 dinosaurs, grouped by the time periods in which they lived. The first group of dinosaurs lived in the Late Triassic and Early Jurassic periods, when the world was a much different place. Not only was there only one continent, called Pangaea, but there were no flowering plants and the animals were quite different from today. The Triassic was a time when the ancestors of the dinosaurs were evolving and changing. By the late Triassic and Early Jurassic, the first dinosaurs had appeared.

The Middle and Late Jurassic saw the rise and dominance of dinosaurs. Sauropods, such as Apatosaurus and Brachiosaurus, became the dominant land animals. Fierce predators, such as Allosaurus, looked for their next victims. Slow, plodding Stegosaurus had its armor for protection.

The Early Cretaceous was a time of more changes. Flowering plants appeared and dinosaurs became more diverse. But the Late Cretaceous was the most exciting time of all.

By the Late Cretaceous, dinosaurs had become amazingly diverse. The largest predators roamed the land for food. There were dinosaurs that built nests and cared for their young, much like modern birds. There were also dinosaurs that built nests but left their young to fend for themselves, like some modern reptiles. One of the most remarkable features of some Late Cretaceous dinosaurs was a crest. Some dinosaurs could "bugle" to other dinosaurs by blowing air though their crests. One dinosaur even looked like it had a trombone attached to its head.

And then dinosaurs died out. The reasons are not yet understood, but scientists are exploring possibilities and studying the available information. Every day scientists get closer to solving the mystery of why dinosaurs died.

So begin your adventure in the world of dinosaurs. The Encyclopedia of Dinosaurs will be your travel guide and companion. And don't fear Allosaurus with its large teeth; after all, now it only lives in your imagination.

Learn more about these dinosaur topics