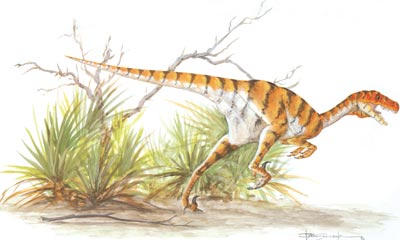 In 1914, Barnum Brown of the American Museum of Natural History collected a nine-inch-long skull and some foot bones from the Judith River Formation in Alberta. It was named Dromaeosaurus, which means "running reptile." After that, the genus was often referred to in various publications even though very little was known about it.

Not much is known about Dromaeosaurus because the only specimen is incomplete. Teeth that may belong to it have been found in several western states and Alberta, but they only tell us that the animal lived in these areas. This was a rare theropod, or at least it was rarely preserved. Scientists are hoping better specimens will be found.