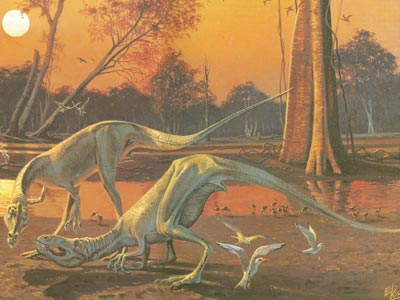 Dryptosaurus is the only carnivorous dinosaur from the East Coast of the United States based on more than a single bone. The partial skeleton was discovered more than a hundred years ago by workers in a quarry in New Jersey. It was originally named Laelaps but this name had been given to a spider, so it was renamed Dryptosaurus.

The only parts of the skull that have been found of Dryptosaurus are pieces of the jaws. The teeth had serrations like those on a steak knife, showing it was a meat-eater. This is supported by the huge, eight-inch claw (it probably had several, but only one was found). Hands with talons like an eagle's would have helped Dryptosaurus hold struggling prey. Its name means "tearing lizard," which refers to these claws.

Although in fragments, enough of the skeleton has been found to show that this animal stood about eight feet tall at the hips. The back legs were much longer than the front, so Dryptosaurus probably walked on its back legs with its tail acting as a balance.

Dryptosaurus is a puzzle because its relationship to other carnivorous dinosaurs is not known. Although it looked somewhat like a tyrannosaur, it had longer limbs for its size and larger, more curved claws on its hands. Scientists hope it will be better understood when they have finished restudying the skeleton.

It is not certain what Dryptosaurus ate, because the fossil record for dinosaurs in New Jersey is very incomplete. All dinosaurs from New Jersey, including both Dryptosaurus and the older Hadrosaurus, were found in marine rocks. The remains of these dinosaurs must have drifted out to sea before becoming fossilized.

Hadrosaur bones are in many Late Cretaceous formations in the area, so hadrosaurs probably made up a large part of the diet of Dryptosaurus. Ceratopsians were probably not present (none of their distinctive bones have been found), so Dryptosaurus did not have to dodge the horns of an angry ceratopsian. Only isolated bone armor plates have been found from nodosaurid ankylosaurs. The body armor of ankylosaurs would have made it difficult for Dryptosaurus to kill the animal, but it is possible that Dryptosaurus scavenged an already dead body. Dryptosaurus may have been like the African lion that feeds on a carcass rather than chasing an antelope.