The earth was still in the process of change as the Early Cretaceous began. The land masses were drifting and the climates were changing. These changes affected the plant and animal worlds. Dinosaurs were becoming more plentiful and many more types were evolving. Some of the more fanciful dinosaurs with unusual crests and frills appeared. In contrast to earlier periods, dinosaurs at this time were different in different areas. Dinosaurs in Africa developed sails, while their relatives in the northern hemisphere did not have them. 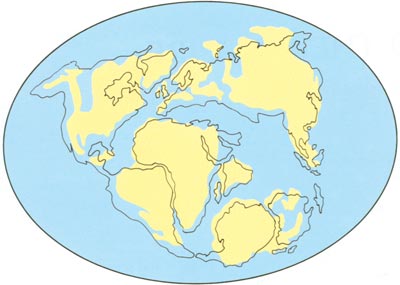 When the Early Cretaceous Period began 144 million years ago, the huge land mass known as Pangaea had already started to separate. Laurasia (present-day North America, Europe, and Asia) was almost completely separated from Gondwanaland (present-day South America, Africa, India, Antarctica, and Australia). Antarctica and Australia were separated from Africa and moved southeast across the Indian Ocean. India headed northeast. Africa was separated from South America, which became an island continent. Only Eurasia stayed attached to North America during the Early Cretaceous. Rifts in the Tethys Sea grew during this period.

Get to know the Early Cretaceous dinosaurs.
Check out these individual profiles:

The Early Cretaceous world was very warm. There were wet and dry seasons rather than summer and winter. Most areas of the world were covered by tropical and semitropical jungles. The low-growing plants were ferns and fernlike vegetation. Plants of medium height were the cycads and their relatives. Treelike plants over 60 feet tall were mostly tropical conifers, ginkgos, and czekanowskian trees (an extinct group of trees with long, needlelike leaves). Fast-growing angiosperms-flowering plants-appeared for the first time.

Surprisingly modern-looking frogs, salamanders, turtles, and crocodiles lived in the rivers and lakes. Snakes had only begun to evolve, but there were many lizards, along with primitive furry mammals. All these animals provided food for small predatory dinosaurs. The long-tailed pterosaurs from the Jurassic were replaced by short-tailed ones, including Anhanguera, Tropeognathus, and Tupuxuara.

As Laurasia and Gondwanaland broke into smaller continents, dinosaurs on the separated continents evolved differently. England and Belgium contain the best-studied Early Cretaceous rocks. The most famous herbivore of this time was Iguanodon. The remains of its smaller, speedier relatives Hypsilophodon, Valdosaurus, and Vectisaurus are more scarce. All these ornithopod dinosaurs were closely related to the Jurassic dinosaurs Othnielia, Dryosaurus, and Camptosaurus. 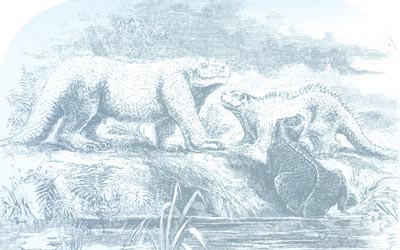 Other plant-eaters from this area include the sauropod Pelorosaurus, with a long, slender upper-arm bone; it seems to have been a brachiosaurid. Craterosaurus is the only known stegosaur; the ankylosaur Hylaeosaurus seems to have been quite a bit more abundant than Craterosaurus. Armored dinosaurs were short and probably ate lower-growing plants. The small herbivore Stenopelix also lived during this period. It was possibly the earliest known ceratopsian. Yaverlandia is thought to be a very early pachycephalosaur.

Since North America was still joined to Europe (via Greenland), it had dinosaurs quite similar to those of Europe. Iguanodon is known from the Early Cretaceous rocks of the western United States. Hypsilophodon was also present. Huge sauropods were in decline; the stegosaurs were almost completely gone. They were replaced by ankylosaurs such as Hoplitosaurus from South Dakota and Silvisaurus from Kansas. Large predators, including Acrocanthosaurus, were also present.

Wyoming and Montana have the best-known North American Early Cretaceous dinosaur fauna. The bulky ornithopod Tenontosaurus is the best-known herbivore. It seems to have been hunted by packs of Deinonychus, a wolf-size predator famous for its sickle-shaped claws. Also found were the small predator Microvenator, the spiky armored Sauropelta, and the hypsilophodontid Zephyrosaurus.

Large ornithopods were not common in the Early Cretaceous of eastern Asia. The iguanodontid Probactrosaurus is thought to be close to the ancestry of the duckbilled dinosaurs. Of roughly the same age was a massive, large-nosed iguanodontid, Iguanodon orientalis. One common herbivore in Asia was Psittacosaurus; it was a small bipedal dinosaur. Armored plant-eaters were also common. One of the last stegosaurs, Wuerhosaurus, was a 25-foot-long plant-eater.

Preying upon these herbivores were large and small theropods. Kelmayisaurus was a megalosaurid that probably ate the armored Wuerhosaurus. Chilantaisaurus maortuensis could easily have held a struggling Probactrosaurus in the grip of its powerful front limbs.

Dinosaurs from the Early Cretaceous of Gondwanaland are less well known than those of Laurasia and show some intriguing and unexpected differences. Sauropods remained prominent in the southern hemisphere despite their drastic decline in the northern hemisphere. Large ornithopods were more scarce than their northern relatives; small ornithopods were common. Theropods in the South were often from families different from those in the North. 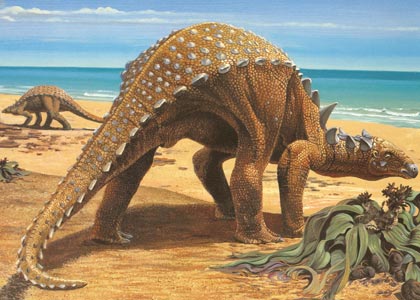 Dinosaurs from northern Africa had sails on their backs, including Ouranosaurus (an iguanodontid), Rebbachisaurus (a sauropod), and Spinosaurus (a theropod). With their wide surface area, these sails would have helped the animals keep cool, particularly if they stood in the shade with breezes blowing by.

Most of Australia's known dinosaurs are from the Early Cretaceous. Because Australia was within the Antarctic Circle, some of its dinosaurs show adaptations to life in seasonal darkness with small size and large eyes. Large Early Cretaceous Australian dinosaurs included the sauropod Austrosaurus, the plant-eater Muttaburrasaurus, and the large meat-eater Rapator. Smaller dinosaurs included the hypsilophodontids Leaellynasaura, Atlascopcosaurus, and Fulgurotherium; the theropod Kakuru; and the armored Minmi. All these dinosaurs are much different than their relatives on other continents.

In the early Cretaceous, many new dinosaurs appeared. They also greatly increased in number. During this period, dinosaurs not only maintained but also expanded their "empire."