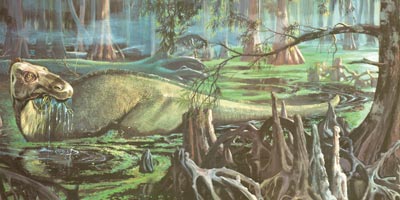 Edmontosaurus was one of the largest hadrosaurids. This flat-headed duckbilled dinosaur was originally found, described, and named by Lawrence Lambe in 1920. It was one of the last dinosaurs, surviving to the end of the Mesozoic Era along with Tyrannosaurus and Triceratops.

The nostrils of Edmontosaurus were large and hollow. They may have been covered with loose skin that the animal could have filled with air. When inflated, these bags may have been used to make loud bellowing sounds. Communication was probably important to this animal; it lived in large groups with both adults and offspring. These bags may also have been brightly colored for display to attract a mate or to help other animals from the same species recognize each other.

Edmontosaurus is responsible for the most spectacular of all dinosaur fossils. These are the famous hadrosaur "mummies." These skeletons were found with skin impressions around the head, shoulders, arms, legs, and tail. These impressions show the pattern of tubercles (bumps) that were found on the skin.

The name Edmontosaurus means the "reptile from Edmonton," which is the capital of the Province of Alberta, where it was found. It was related to other flat-headed hadrosaurids, including Shantungosaurus from the People's Republic of China. It was not as closely related to the solid-crested hadrosaurids, such as Saurolophus and Prosaurolophus, which lived in the same areas as Edmontosaurus. After much study, Anatosaurus has been found to be the same animal as Edmontosaurus, which was its first and therefore correct name.