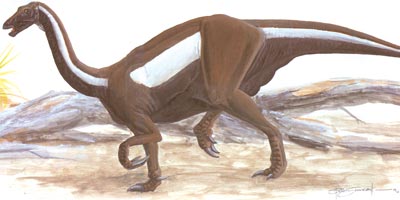 In 1980, Altangerel Perle named Erlikosaurus andrewsi after the demon Erlik from Mongolian mythology and paleontologist Roy Chapman Andrews. It was closely related to Segnosaurus. Erlikosaurus is the only segnosaurian that was found with a skull, making it a very important segnosaurian. Unfortunately, little of the skeleton was discovered.

The teeth of Erlikosaurus show it was a plant-eater. How it used the large, thin, slender claws on its feet is a mystery; perhaps they were useful when the animal waded across rivers.