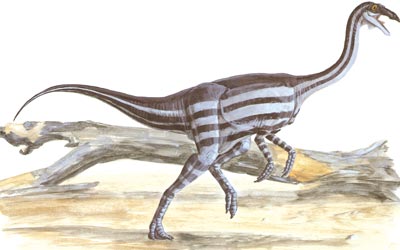 Gallimimus ("chicken mimic") was the largest of the ornithomimids (the "ostrich dinosaurs") known. It has been found only in the Late Cretaceous Nemegt Formation of Mongolia. Its form and lifestyle were not very different from its North American relatives Struthiomimus and Ornithomimus. However, its back limbs were shorter, its toothless skull was much longer, and its hands were smaller when compared to other members of the ornithomimid family. Several juveniles of this species have been found in addition to the giant one.

Gallimimus could not use its hands to grasp, so it may have used them to dig in the ground for food. It is also possible it fed on eggs. It probably ate mostly plants and may have also eaten insects if it could catch them. Like all theropods, it walked on its two back legs (bipedal).