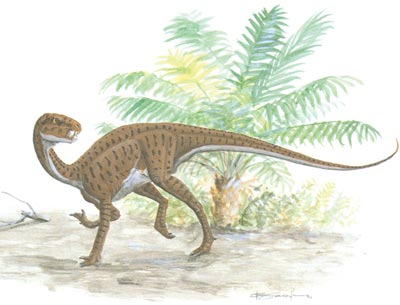 Heterodontosaurus was a small plant-eater that probably walked only on its back legs (bipedal). The front limbs were muscular, and the joints of the elbow and wrist show that it used its front limbs for grasping and not for walking. The fourth and fifth fingers were small and probably opposed the first three, forming a grasping hand for grabbing food.

The pelvis of Heterodontosaurus was long and narrow. The pubis was almost like those found in later ornithischians. The back legs were long, with the lower leg and foot longer than the thigh. The ankle bones and all but one of the bones in the foot fused (joined) together, as in birds. The joints of the knee and ankle only allowed forward and backward movement of the leg. These features support the idea that Heterodontosaurus could run quickly on its back legs. This would have helped it escape from carnivores.

The skull of Heterodontosaurus was about the size of a rabbit's. It had an unusual feature, for which it was named. Most dinosaurs had only one kind of tooth, but this dinosaur had three kinds of teeth. Its name means "different-toothed reptile." The front teeth were small and were on the sides of beaks on both the upper and lower jaws. These teeth were probably used to chop leaves and stems. The back teeth (cheek teeth) were tall and squared off, and the upper and lower teeth met at an angle for grinding plants. A thick coat of enamel protected the teeth, so the animal could chew constantly. The teeth of Heterodontosaurus were more advanced than those of Lesothosaurus. But both dinosaurs' teeth were better suited to eating plants than the other plant-eaters at this time.

Heterodontosaurus also had large, paired tusks (the third type of tooth) that were in front of the cheek teeth. It probably used these teeth in feeding, but may have used them to attract females or to fight other males. The lower tusks were much larger than the uppers. Females may not have had these tusks.

Heterodontosaurus probably had fleshy cheeks. These would have kept food from falling out of the mouth during chewing. Similar cheeks were present in many other herbivorous dinosaurs, including most later ornithopods and many prosauropods.