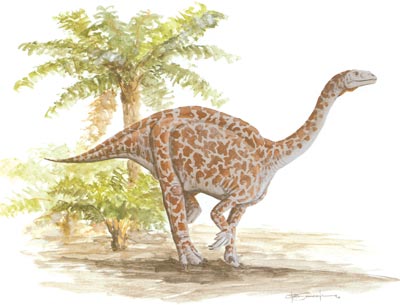 Lufengosaurus was a close relative of Plateosaurus. It was about the same size, but it lived earlier. There are many fossils of this dinosaur from the Lufeng basin of Yunnan Province in southwestern China. It is one of several prosauropods known from the Early Jurassic Lufeng Formation, along with some early crocodiles, mammals, and therapsids.

Although there are complete skeletons of this dinosaur, it is not fully described. The skull of Lufengosaurus was long and flat, and it had a small bump on its snout just above the nostril. It had a long neck.

Its teeth were bladelike with crowns that were wider at the bottom. The teeth were widely spaced. Its diet is unknown. It probably ate plants, but its teeth were sharp and it may have also eaten small animals.

The front legs of Lufengosaurus were shorter than the powerful back legs. The animal walked on all fours, but probably rose on its back legs to feed on tall plants. The hands of Lufengosaurus had a large thumb with a claw, used for getting food and maybe as a weapon.

A skeleton of Lufengosaurus was the first dinosaur mounted in the People's Republic of China. It appeared on a Chinese postal stamp when the skeleton went on display.