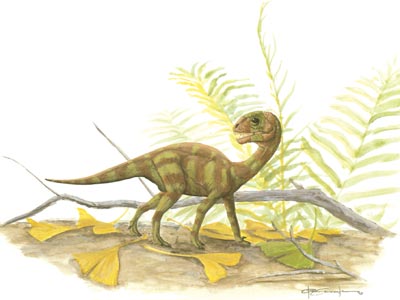 In the mid-1970s, Jose Bonaparte led an expedition to the Late Triassic El Tranquilo Formation of southern Argentina. They made one of the most important Triassic dinosaur discoveries up to that time: a nest of tiny dinosaurs of a new prosauropod. Bonaparte and Martin Vince named it Mussaurus ("mouse reptile") in 1979. There was a nearly complete skeleton that was about six inches long without its tail. Although these specimens were all juveniles, Mussaurus is now very well known because the skeletons were complete. More recently, adult skeletons have been found in the same formation in Argentina.

Mussaurus was immediately recognizable as a prosauropod in the limb and pelvic area, although the hatchlings had short necks and high, short skulls with large orbits (eye sockets). The younger animals had different body proportions than did the older animals.

Bonaparte and Vince suggested that Mussaurus might be halfway between the prosauropods and sauropods, and might be closely related to the ancestry of the sauropods. It is also possible that many sauropod features in the juveniles might be only proportional differences in the skeleton between the juveniles and the adults. This question requires further study, and both the adult and hatchling skeletons will be studied in greater detail. Mussaurus may prove to be an important animal in finding the relationship between prosauropods and sauropods.

Mussaurus provided important information about dinosaur social behavior. The hatchlings and eggs in the nest show that these dinosaurs laid eggs. Several eggs in the nest show that prosauropods laid more than one egg at a time. Now that juveniles, immature specimens, and adults of Mussaurus are known, scientists can study proportion changes in the different-aged animals. This will give them information about growth rates and development of the prosauropod dinosaurs.

Nigersaurus: The 'Mesozoic Cow' With More Than 500 Teeth
Why Did the T. Rex Have Such Puny Arms?
Rare Egyptian Fossil Find Holds Clues About African Dinosaur Migration