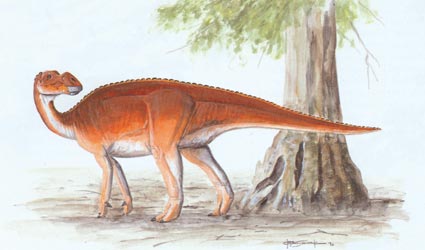 The "reptile from Muttaburra," Muttaburrasaurus is one of the recently discovered ornithopods from Australia, and it is one of the best known from there. There are only a few incomplete skeletons and skulls. It was a large animal, only slightly smaller than Iguanodon from Europe and nearly the size of Ouranosaurus from western Africa. These two animals were probably closely related to Muttaburrasaurus.

Muttaburrasaurus lived during the Early Cretaceous in western Australia. It probably walked and ran on its back legs, but rested on all fours. A complete hand has not been found, so it is not known whether it had a thumb spike like Ouranosaurus and Iguanodon. Further discoveries will tell us more about this important part of the Muttaburrasaurus skeleton.

The broad head of Muttaburrasaurus looked like many other large ornithopods of its time. It did, however, have a large hooked arch over the snout, unlike any other large ornithopods except the hook-nosed hadrosaurids. The fronts of the jaws were toothless and had a horny covering, much like turtles and birds. This beak was used to tear leaves and fruits from shrubs and low tree branches. The backs of the jaws were lined with many large teeth to tear apart food. The stomach of Muttaburrasaurus seems to have been large; it probably needed a large gut to digest a diet of plants.