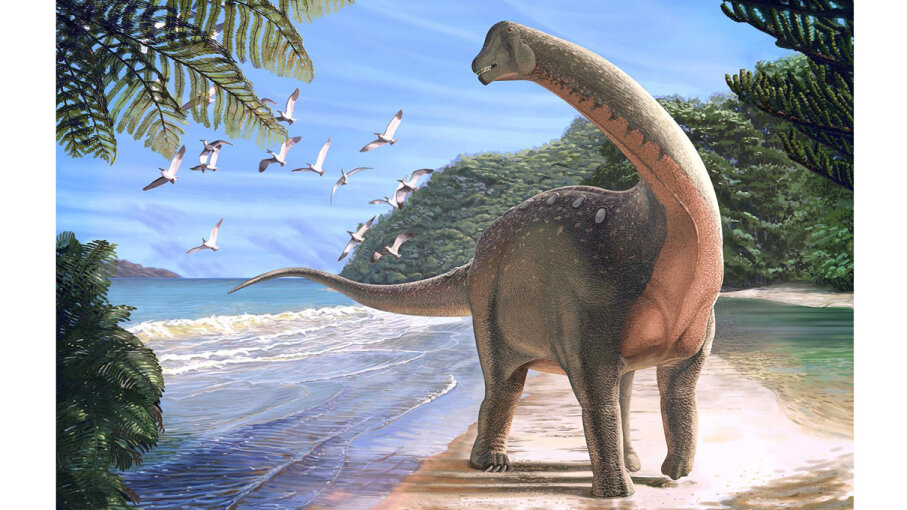 This illustration shows what the new titanosaurian dinosaur Mansourasaurus shahinae might have looked like approximately 80 million years ago in what is now the Western Desert of Egypt. Illustration by Andrew McAfee, Carnegie Museum of Natural History

The finding of a new dinosaur species is always cause for celebration. To dino enthusiasts, memorizing new names is a favorite pastime. (Just ask some parents.) And on an academic level, recently discovered species can help us better understand the story of dinosaurian evolution.

Occasionally, they provide clues to other mysteries as well. On Jan. 29, 2018, the scientific journal Nature published a study announcing that the remains of a previously unknown dinosaur had been found in Egypt. A long-necked herbivore, the beast's been dubbed Mansourasaurus shahinae. Size-wise, it wasn't too impressive, but the discovery still has a lot of scientists very excited. That's because, by virtue of its age and anatomy, Mansourasaurus might settle a debate about where the African continent was located on Earth when the non-avian dinosaurs died out.

Oh Africa, Where Art Thou?

Alfred Wagner was a meteorologist who, in 1915, made the case for a theory he called "continental drift." This is the idea that the continents gradually move across Earth's surface as time goes by. Turns out Wagner was right. We now know that, due to plate tectonics, the continents are indeed moving along at a steady pace. And there's more: A century's worth of research has allowed geologists to piece together the travel histories of major landmasses. For instance, scientists have figured out that, after having been separated for tens of millions of years, South and North America were reconnected by the Central American land bridge around 3.5 million years ago.

Still, our knowledge does contain some gaps. Consider Africa. Roughly 300 million years ago, it was part of the supercontinent Pangea. This mega-landmass started to break apart 100 million years later. But we don't know exactly what Africa was doing during certain stages of this process.

The Cretaceous Period lasted from 145 to 66 million years ago. Famously, it ended with a mass extinction that wiped out all dinosaurs, excluding birds. We've uncovered numerous African dino fossils from the early Cretaceous Period — including bones that represent the weird, fin-backed carnivore Spinosaurus. However, late Cretaceous material from Africa is awfully scarce.

That's a problem for people who study continental drift. Fossil evidence is critical when it comes to theorizing about when, where and how the continents merged or separated. If you find similar-looking fossil remains from the same geologic time on two separate continents, there's a good chance that those landmasses were linked together at some point.

Historically, we haven't been able to compare Africa's late Cretaceous fossil record with that of other continents. As O'Connor pointed out, there simply aren't many African fossils that date back to this time. The information gap has sparked some debate. Without late Cretaceous fossils to work with, paleontologists could only speculate about whether Africa was still connected to South America or Eurasia back then.

Mansourasaurus offers a badly needed breakthrough. Its remains were first spotted during a December 2013 expedition into western Egypt's Dakhla Oasis. The campaign was spearheaded by Hesham Sallam, a paleontologist at Mansoura University in Egypt's Nile Delta. "In early 2014," study co-author Eric Gorscak says via email, "the team came back and started the excavation that would last the next three weeks ... In total, 19 field jackets [plaster coverings placed over and around fossils] and many isolated bone fragments were collected."

Named in honor of Mansoura University, Mansourasaurus shainae was a long-necked dinosaur, or "sauropod." More specifically, it was a titanosaur, a group of Cretaceous sauropods whose ranks included some of the biggest animals to ever walk Earth. (One species, Argentinosaurus huinculensis, may have weighed over 77 tons — or 70 metric tons.)

Like many other titanosaurs, Mansourasaurus had bony knobs embedded in its skin. However, unlike some of its cousins, the creature was no behemoth. A full-grown Mansourasaurus would've been around 33 feet (10 meters) long and weighed just 5.5 tons (5 metric tons).

Because it was found in late Cretaceous rock, Mansourasaurus is hugely important. Knowing this, Sallam and his team compared the animal's bones with those of contemporary titanosaurs from South America and Eurasia.

It turns out that, anatomically speaking, Mansourasaurus bore a closer resemblance to the Eurasian titanosaurs. In O'Connor's words, the finding "points to some [geographical] connection between Africa and Eurasia for at least some portion of the latest Cretaceous."

Walking — or Swimming — With Dinosaurs

While the existence of Mansourasaurus does strongly indicate that large animals (i.e. titanosaurs) could travel from Eurasia to Africa back then, O'Connor says scientists need more fossils to confirm this hypothesis. Also, right now it's impossible to say if there was a direct land bridge between the two continents. "Parts of Europe and northern Africa at the time experienced higher sea levels that flooded the region into a system of islands," Gorscak says.

So maybe, instead of walking from one continent to the other, sauropods like Mansourasaurus made the journey via island-hopping. "The timing, extent of islands and land bridges, and reconstruction of paleo maps during this time and for both Europe and Northern Africa is still an active area of research," Gorscak adds.

Scientists are on the case. O'Connor says that Sallam and his students "have great ambitions" for studying other fossils from Africa's late Cretaceous deposits. Furthermore, O'Connor himself has "ongoing projects with other colleagues exploring similar-aged rocks in Tanzania, Madagascar and Antarctica."

"There are many more exciting discoveries on the horizon," he predicts. We can't wait to read about them.

The lower jaw bone of the new titanosaurian dinosaur Mansourasaurus shahinae is seen here in the rock of where it was found in Dakhla Oasis, Egypt.
Hesham Sallam, Mansoura University
Now That's Interesting
One of Africa's most famous dinosaurs is Heterodontosaurus, a small, tusked creature with opposable digits. It lived during the Jurassic Period, which came right before the Cretaceous.