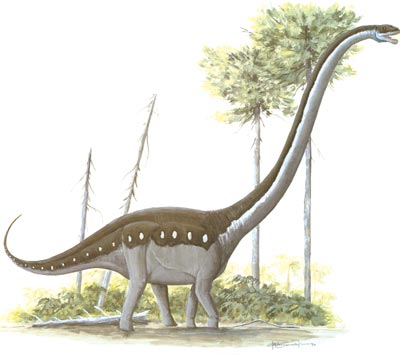 Most of the sauropods known from the Late Jurassic of China had extraordinarily long necks. Not only did their necks have several more vertebrae than the sauropods of North America and Africa, the vertebrae themselves were larger and longer.

Herds of Omeisaurus roamed along Jurassic river banks, feeding on low, shrubby ferns and seed ferns. Like most sauropods, Omeisaurus mostly inhabited open areas rather than grazing in forests as was previously believed.

Omeisaurus was the most common Late Jurassic Chinese sauropod. Workers have found many skeletons, some nearly complete, and several skulls of this dinosaur since it was first described and named in 1939. It was named after the sacred mountain Omeishan, located near where the first skeleton was excavated. Most skeletons were unearthed in the 1970s and 1980s as part of the "great Chinese dinosaur rush."

Chinese paleontologists have identified five different species of Omeisaurus. These include O. junghsiensis, O. changshouensis, O. fuxiensis, O. tianfuensis, and O. luoquanensis. Scientists named all of the species after the locations where workers dug up the skeletons. More detailed studies may show that some of these speciesbelong in a different genus or that some species may need to be combined. Scientists first classified the smallest species, the 35-foot-long Omeisaurus fuxiensis, in a separate genus, Zigongosaurus. The Middle Jurassic species that may be the ancestor of the other four species is O. luoquanensis.

Omeisaurus had 17 neck vertebrae. The longest neck belonged to O. tianfuensis; its neck was about 30 feet long. A 67-foot-long mounted skeleton of O. tianfuensis is on display at the Zigong Museum. Only the neck of Mamenchisaurus hochuanensis, with 19 neck vertebrae, was longer. Mamenchisaurus was a close relative of Omeisaurus. The neck of Omeisaurus seems too long when compared with its body; it does not seem balanced. But its vertebrae had thin walls and large holes, making them light. Groups of muscles and long, delicate ribs attached to each vertebra so that Omeisaurus could control its neck.

Omeisaurus had a deep, blunt head and spoon-shaped teeth for eating plants. Its skull resembles the skull of Camarasaurus. For this reason, scientists classified Omeisaurus as a camarasaurid sauropod. Now that there are more skeletons, Chinese paleontologists group Omeisaurus with Euhelopus and Mamenchisaurus in the family Euhelopodidae. Other paleontologists believe that it belongs with Shunosaurus in the more primitive family Cetiosauridae.

Their huge size probably protected most sauropods from attack by predatory dinosaurs, but Omeisaurus may have had something else to protect it. In the late 1980s, paleontologists working on the Middle Jurassic sauropod Shunosaurus discovered that its tail ended in a large bony club, like that of the ankylosaurids. Workers found more tail clubs, of a different shape, in the same locations as Omeisaurus. Some Chinese paleontologists think they may belong to Omeisaurus. But an Omeisaurus skeleton with the tail club attached must be found for scientists to be sure.