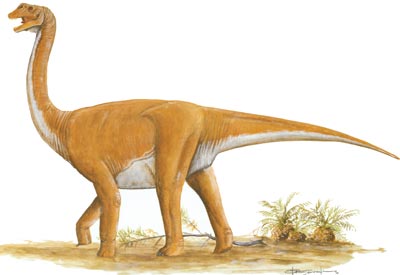 Discovered by the Joint Polish-Mongolian Paleontological Expedition in 1965, the sauropod Opisthocoelicaudia is known from a skeleton with nearly all the bones of the body except the neck and head. The skeleton was found in the same Late Cretaceous rock layers as the skull of Nemegtosaurus. Euhelopus may have been a close relative of Opisthocoelicaudia, but Mamenchisaurus and Nemegtosaurus belong in different families.

A member of the family Camarasauridae, Opisthocoelicaudia survived its Late Jurassic relatives in North America by 70 million years. It was perhaps 40 to 50 feet long and may have weighed as much as 20 tons.

The name Opisthocoelicaudia refers to the unusual trait in the vertebrae (bones of the spine) from the front half of the tail. The side of the vertebra that faced the end of the tail curved deeply inward (it was concave), and the side of the vertebra that faced the front of the animal curved deeply outward (was convex). Its name means "rear cavity tail." This may have allowed the animal to use its tail as a prop, like the third leg of a tripod, when it reached up for higher plants and trees. This would have helped balance the animal and taken some of its weight off its back legs. It also had an extra vertebra in the pelvic area to strengthen the hips, and the hip socket was strong to hold the immense weight of this dinosaur on two legs. No other sauropod had these features; Opisthocoelicaudia may have been a specialized eater.

The hips and tail were also unusual when the animal stood on its four feet (quadrupedal). From the side, its body was almost straight from its neck to the beginning of its tail. Most sauropods had an arched profile. This shape was probably because of the specializations in the tail.

Most of the neck was missing except for several bones. They show that when the animal was moving, Opisthocoelicaudia held its neck with the head straight out in front of the body. The neck and skull of Opisthocoelicaudia may have been pulled apart by scavengers, which left grooves on the pelvis and on a bone in its leg where their teeth due into the bone.