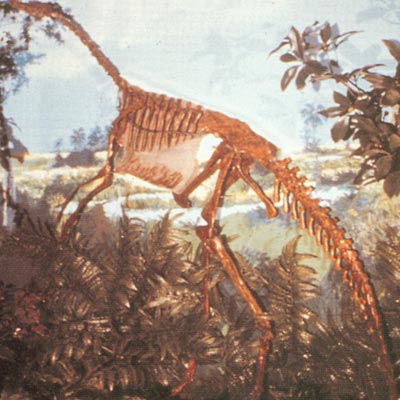 This dinosaur has been found mainly in the Late Cretaceous Judith River and Horseshoe Canyon Formations of Alberta, but less-complete specimens have been found in the western United States as well. Ornithomimus ("bird mimic") looks much like a modern flightless bird, such as the ostrich. Both have small heads with beaks, long necks, and long back limbs for fast running. But Ornithomimus had a long tail and long arms with three-fingered hands that ended in long, slender claws instead of short wings and no tail. The foot of ornithomimids was similar to the foot of some modern flightless birds; they had three toes on long upper foot bones. The ornithomimids may have been able to run up to 30 miles per hour. Ornithomimus differs from its close relative Struthiomimus because its back and neck were shorter and its limbs were more lightly built.

All ornithomimids had lightly built skulls and no teeth. They may have been omnivorous, eating small vertebrates, insects, and fruits. But some paleontologists think they were only plant-eaters.