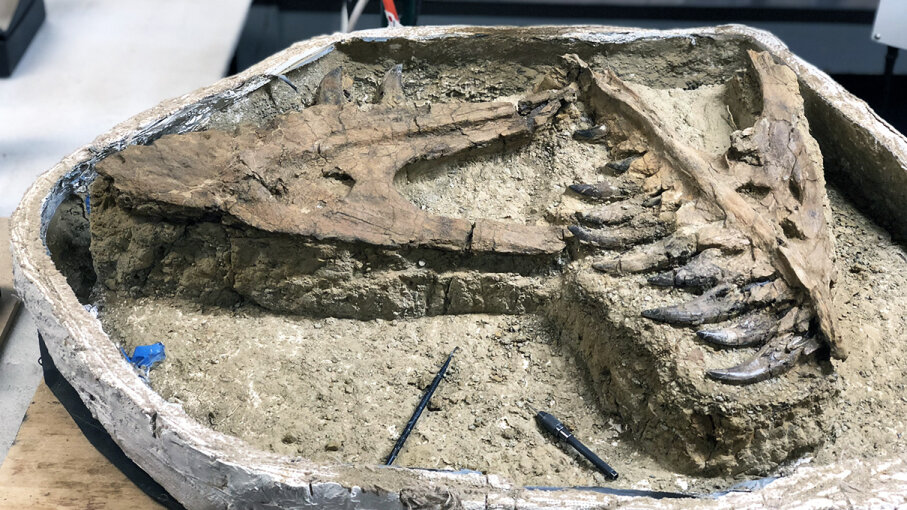 If this is in fact the upper jaw of a baby T. rex, it would be the most preserved and most complete specimen among those ever found in Montana's Hell Creek.  University of Kansas

"Paleontology is a team sport," observes Kyle Atkins-Weltman, a fossil preparator at the University of Kansas. For years now, the school's paleo department has been prospecting the fossil-rich Hell Creek deposits of Montana. In June 2016, Kris Super, another preparator at KU, discovered some tiny bone fragments called "float." They were the tip of one tantalizing iceberg.

The scattered float led KU's team to a set of identifiable bones. Left behind by a mid-sized carnivorous dinosaur, the bounty included pieces of the animal's foot, skull, hips and vertebrae. A partial upper jaw loaded with teeth was easily the most eye-catching item of the bunch.

Removed from Hell Creek during the 2017 field season, the material's now being cleaned and analyzed at the university. The big discovery was announced on Thursday, March 29, 2018.

It's clear that the fossils (which are approximately 66.5 million years old) represent a member of the tyrannosaur family. The question is which species? A press release says the material probably came from a juvenile Tyrannosaurus rex. If this is true, then the poor critter died at a tender age. "We would suspect [it would have been] maybe 6 to 7 years old, possibly 8," says Atkins-Weltman.

Should the animal indeed be a young T. rex, it's part of an exclusive club. Atkins-Weltman told LiveScience that fewer than five "decently preserved juvenile T. rexes" have been found at Hell Creek. He adds that the new specimen would "probably be the most preserved and most complete" specimen among them.

Then again, it might be something else. In 1988, dino expert Robert Bakker and two colleagues looked over the skull of a smallish tyrannosaur that had been dug up in Montana. They claimed it belonged to a new species and named it Nanotyrannus lancensis. Supposedly a smaller cousin of T. rex, this thing would've co-existed with the better-known predator.

Not all paleontologists are convinced. While a few other bones have since been attributed to Nanotyrannus, skeptics argue that these remains — along with that skull — really came from a young Tyrannosaurus rex. In other words, Nanotyrannus may not be a valid genus at all. Like humans, dinosaurs changed shape as they aged. This fact might explain the physical differences between alleged Nanotyrannus bones and other T. rex remains.

"It's reasonable to assume Nanotyrannus could be valid — but we must show it's not just a stage in the life history of T. rex," says KU professor David Burnham. The University owns a lot of material from other T. rex skeletons. Burnham and his Kansas colleagues intend to compare those bones to the new remains. That should help them determine if they've got a juvenile Tyrannosaurus or a mature Nanotyrannus on their hands. And since the new specimen is so complete, analyzing it may bring us closer to putting the entire Nanotyrannus debate to rest.