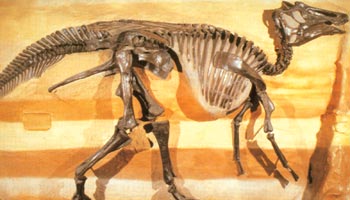 Prosaurolophus was a common duckbilled dinosaur that lived during the Late Cretaceous in North America. It was discovered, named, and described by Barnum Brown of the American Museum of Natural History in 1916.

Prosaurolophus probably walked and ran on its stout, strong back legs. While resting, it supported itself with its more lightly built front limbs. The animal mostly used its front limbs for grasping and pulling branches, leaves, and fruit. Females may have used their front limbs for building nests.

The head of Prosaurolophus was much like other hadrosaurs. It had many teeth, with as many as 50 teeth in each jaw. It also had as many as 250 replacement teeth in each jaw that were below the top teeth. The teeth below would replace the chewing teeth when they were needed.

The snout of Prosaurolophus looked much like a duck's. The rim of the beak would have been covered by a stiff bill for cropping foliage and other food. The most unusual part of its skull was the wide, solid bump above its eyes. The bump may have distinguished one animal from another, and males from females.

Prosaurolophus, which means "before Saurolophus" was closely related to the longer-crested Saurolophus. More distant relatives included Edmontosaurus and Shantungosaurus.