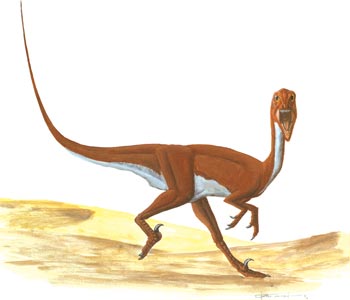 Discovered during an expedition by the American Museum of Natural History, Saurornithoides is an example of a birdlike dinosaur. It looked much like a bird. It was found close to where two other birdlike dinosaurs (Velociraptor and Oviraptor) were also discovered.

This agile 60-pound predator had a long, slender snout and large eyes set in deep sockets. The front limbs of Saurornithoides were long for a bipedal (it walked on two legs) predator. On each hand it had three fingers that were covered by sharp claws. The back limbs had feet with four toes each. One toe pointed down, two large toes pointed forward, and the inner toe was held off the ground. This inner toe had a sickle-shaped claw that may have been used as a weapon. Its relative Deinonychus also had a sickle-shaped claw on its foot.

Saurornithoides looked somewhat like a modern flightless bird. Its name means "birdlike reptile." It may have even had a similar lifestyle. It searched for prey, perhaps in twilight (or even at night). Saurornithoides may have preferred small mammals, although it probably ate any prey it could catch.