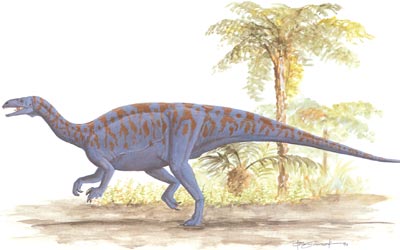 Sellosaurus skeletons have been found in the middle Late Triassic beds in Nordwurttemberg, West Germany. These beds are slightly older than those where the skeletons of Plateosaurus were found. Although Frederich von Huene described Sellosaurus in 1907, confusion has surrounded the relationships of this dinosaur, Plateosaurus, and other members of the Plateosauridae. Using paleontological detective work, Peter Galton cleared up the mystery. By careful comparisons, Galton has shown that Sellosaurus appeared first and was the only prosauropod in the middle Late Triassic. It was followed by but did not overlap in time with Plateosaurus.

Sellosaurus was similar to Plateosaurus, but smaller. Its teeth changed more from the front to the back of the jaw. This and other details of the skull may mean that Sellosaurus had a slightly different, softer plant diet than Plateosaurus. The two animals are similar in most details and are close relatives. An animal very much like Sellosaurus was probably the ancestor of Plateosaurus. The sharp contrast between the rarity of Sellosaurus and the extreme abundance of Plateosaurus is dramatic evidence of the sudden spread of prosauropods at the end of the Triassic and in the Early Jurassic. 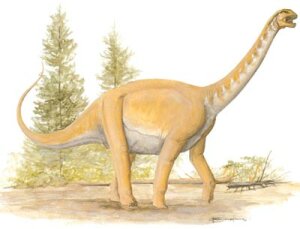