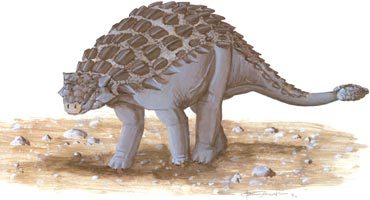 Shamosaurus is one of the oldest known ankylosaurs. It lived about the same time as the nodosaur Sauropelta.

Little is known of Shamosaurus other than two skulls, one of which was found with two armor-plated collars. The skulls were low and broad across the back; they look like triangles when viewed from the top. Armor plates covered the outer surface of the skull, but these were so fused that no pattern can be seen. Each plate looks like a small bump, making the skull look rough. Large spines were fused to the back of the skull on the sides. Armor was also fused to the outer surface of the lower jaw.

The beak of Shamosaurus was narrow. This dinosaur was probably selective in the parts of plants it ate. The teeth are not well known, but were probably small, leaf-shaped, and made for eating soft plants. It is not known what the rest of the body looked like.