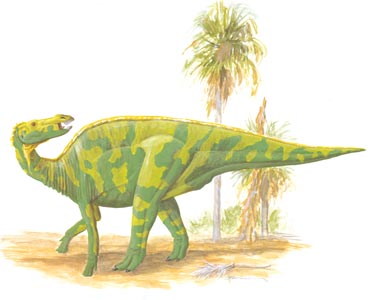 Shantungosaurus may have been the largest hadrosaur. It is larger than some of the smaller sauropods. Named and described in 1973, Shantungosaurus is known from many disarticulated (not joined) bones from the Shandong Province, China.

Shantungosaurus was a flat-headed Hadrosaur, much like its North American relative Edmontosaurus. The skull was long, with an extended snout and jaws. The jaws had a lot of room for the many teeth. There were as many as 63 places for teeth in each jaw, and there were six teeth in each place. This was probably the most teeth seen in any dinosaur.

Around the nostrils, there was a large hole where there was probably a fleshy "bag." The animal may have inflated the bag to make sounds or to attract a mate. It may have also used it to defend its territory.

The "reptile from Shandong" had very stout back limb bones, which it needed to support its large size. Shantungosaurus probably used both its front and back legs to walk, even when trying to escape from its enemy, Tarbosaurus.