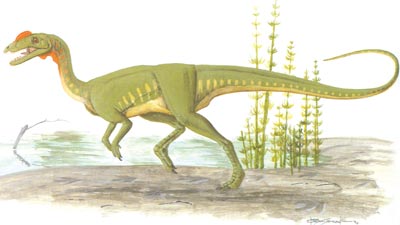 The agile and fleet-footed carnivore Syntarsus was a small predator. It strongly resembled Coelophysis from the Late Triassic of Arizona and New Mexico. The bones of the head and jaws were large compared to Coelophysis, and the neck was somewhat shorter. Syntarsus was sturdier and slightly larger than Coelophysis.

Its jaws had many small, bladelike, serrated teeth for slicing the flesh of its prey. Syntarsus probably ate other small reptiles and fish, and it lived along stream courses in herds. Like Coelophysis, a large number of Syntarsus remains were found in one area, suggesting that they were social animals.

The animal is named for its fused ankle, or tarsus, joint. Its name means "fused tarsus." This ankle gave it greater speed and endurance when running. It would have needed to run quickly to escape predators. The front legs were quite small and weak, while the rear legs were stout. The tail was large and probably stiff. The limbs' proportions suggest that Syntarsus may have moved by "saltation," or hopping, similar to rabbits or kangaroos. This hopping produces abrupt and unpredictable movements in order to escape predators.

The many skeletons from Zimbabwe have two body forms: males were smaller and more slender, while the females were robust and larger. There were many more females than males.

The bones of Syntarsus had so many bone cells and blood vessels that they resemble the bones of birds and mammals. This may mean that Syntarsus was a warm-blooded dinosaur.

It is difficult to pinpoint ancestral relationships, but a case may be made that Coelophysis is a close ancestor of Syntarsus. Changes in Syntarsus include fewer teeth; larger openings in the skull for larger and stronger jaw muscles; growth of small plates of bone between the teeth for more biting strength; smaller front limbs and weaker hands; stronger pelvis and bottom of the spine; and fusion of the ankle joints. Syntarsus became more powerful than Coelophysis. Similar trends happened to all the predatory dinosaurs that appeared in the Jurassic. This resulted in the development of the large and ferocious predators such as Allosaurus and its relatives millions of years later.