by Jesslyn Shields Sep 20, 2016
An artist's illustration depicts the relative sizes of a modern housecat and a pterosaur from the group Azhdarchoidea. Dr. Mark Witton

We live in an age of relatively small creatures. Because the largest land animal we'll ever see is the African elephant, finding out the colossal Dreadnoughtus dinosaur was 12 times bigger, was mindblowing. Similarly, it's easy to get excited about the oversized flying pterosaurs that cruised the prehistoric skies like small airplanes — the largest one as tall as a giraffe with a 30 foot (9 meter) wingspan. So with our obsession with size, news of the discovery of a pterosaur the size of a housecat might elicit a less enthusiastic response from the public.

But not from paleontologists, who know that this new discovery of a small-bodied animal from a time when super-sized was the norm is worth paying attention to.

A new paper in the Royal Society journal Open Science reports the discovery of a partial skeleton of a pterosaur from the group Azhdarchoidea, whose relatively diminutive wingspan is on par with that of a modern great horned owl. This group of toothless, short-winged pterosaurs (not technically dinosaurs) lived in the Late Cretaceous — a time when, the fossil record tells us, pterosaur evolution seems to have favored gigantism. Scientists have assumed that while tiny pterosaurs existed in the Late Triassic and Jurassic, around 160 million years of pterosaur evolution culminated in the Late Cretaceous with the smaller ones being out-competed by birds. However, this new discovery suggests small pterosaurs may have shared the skies with their huskier family members and with birds alike.

"The hollow bones of pterosaurs are notoriously poorly preserved, and larger animals seem to be preferentially preserved in similarly aged Late Cretaceous ecosystems of North America," says co-author Elizabeth Martin-Silverstone, a paleobiology PhD student at the University of Southampton, in a press release. "This suggests that a small pterosaur would very rarely be preserved, but not necessarily that they didn't exist."

This idea explains, to some extent, why there is virtually no fossil evidence of juvenile pterosaurs — even those of large species: their lightweight bodies were easily crushed and simply didn't fossilize well. And although this particular fossil, found in British Columbia, is in pretty bad shape, enough of it was preserved to verify that this little guy was almost fully grown.

"[This] adds to a growing set of evidence that the Late Cretaceous period was not dominated by large or giant species, and that smaller pterosaurs may have been well represented in this time," says Martin-Silverstone.

So This Might Be Why You Ditched Your Fitbit

Huge Solar Storms Could Have Kickstarted Life on Earth 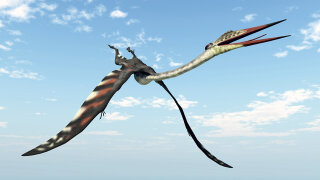 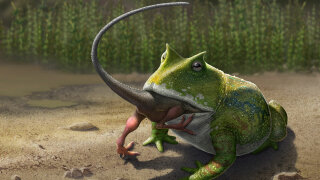