Dinosaurs had not arrived as the Permian Period ended and the Triassic began. The earth's land and climate were changing, the ancestors of the dinosaurs were evolving, and many plants and animals were becoming extinct. Because these events took place, dinosaurs became rulers of the earth by the Jurassic Period. 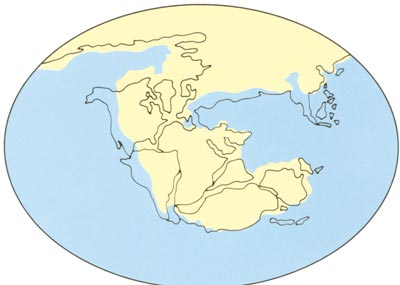 At the beginning of the Triassic Period, all land was joined as a single large mass called Pangaea. It stretched nearly pole to pole. The only block of land not joined to Pangaea was southern China and southeast Asia, which collided with the Chinese mainland before the Late Triassic. Throughout the Triassic, Pangaea slowly moved north and turned clockwise. By the Middle Triassic, the continent was a crescent-shaped mass facing east and centered on the equator. The eastern side of Pangaea surrounded a large body of water, the Tethys Sea, which joined a single global ocean.

Get to know the Triassic to Early Jurassic dinosaurs.
Check out these individual profiles:

Large land masses are more sensitive than oceans to heating and cooling. During a hemisphere's summer, a large land mass warms the hemisphere. It then becomes the center of cooling during the hemisphere's winter. This produces air pressure changes, which result in strong seasons. Although scientists disagree about the exact climate, it seems the Triassic started out cool and dry and became warmer, with rainy summers and drier winters. This became a monsoon weather pattern, as in southeast Asia today.

Triassic plants included ferns, conifers, and cycads. These plants would have needed warm, moist weather to survive. Throughout the Triassic, some plants were becoming extinct and others were evolving. The Late Triassic plant Sanmiguelia may be the ancestor of flowering plants, though it did not become established until the Early Cretaceous.

Dinosaurs did not appear until the Middle to Late Triassic. But many other animals lived in the Triassic world. The therapsids were mammallike reptiles that ruled the earth before dinosaurs. They included the labyrinthodonts, the late survivors of the early amphibians; procolophonids, the early plant-eating reptiles; dicynodonts, the turtlebilled plant-eaters; and cynodonts, the ancestors of mammals. 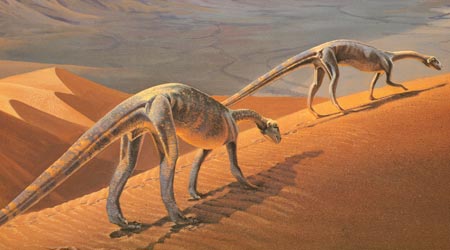 Canadian Museum of Nature
Massospondylus, prosauropods that lived during the Early Jurassic

Lystrosaurus, a dog-size dicynodont, was the ruling animal at the beginning of the Triassic. Scientists have found its fossils on almost every continent of the world-Asia, Africa, South America, and Antarctica. There were no land or weather barriers to stop animals from roaming freely. Other therapsids were also present in the Early Triassic, including the cynodont Thrinaxodon.

Archosaurs first appeared in the Late Permian as a minor part of the fauna. Dinosaurs, crocodiles, and pterosaurs all descended from the earliest archosaurs. The crocodile-like proterosuchians were the first archosaurs, and they gave rise to many other groups, including the aquatic phytosaurs, the terrestrial carnivorous groups Erythrosuchidae and Rauisuchidas, and the herbivorous aetosaurs. Proterosuchus, which dates back to the early Triassic, was almost the size of a modern crocodile.

Halfway through the Early Triassic, the Lystrosaurus fauna was replaced by other dicynodonts, cynodonts, and archosaurs. Important archosaurs that appeared were Erythrosuchus, a large meat-eater; and Euparkeria, a fast, small meat-eater. Euparkeria was important because it had features of later archosaurs; it stood more upright, it had armor, and it had no teeth on its palate. Also appearing around this time were the rhynchosaurs. This group of land herbivores were close relatives of the archosaurs and were among the most plentiful plant-eaters in the Middle and early Late Triassic.

The Middle Triassic is important as a time of transition. The archosaurs were becoming more important and more meat-eaters were emerging, including many kinds of small, crocodile-like archosaurs. Also showing up were the large, four-legged predators, the Prestosuchidae and Rauisuchidae, and the small land carnivore Gracilisuchus. All these were members of the line leading to crocodiles.

The ancestors of the dinosaurs were beginning to be important. Lagosuchus, Pseudolagosuchus, and Lagerpeton were tiny meat-eaters with long legs. They were close to the common ancestors of dinosaurs and pterosaurs, with ankles like later dinosaurs. 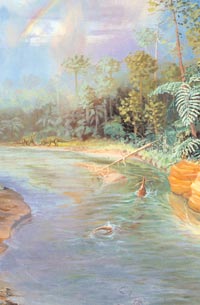