Browse the article Why Did the T. Rex Have Such Puny Arms? 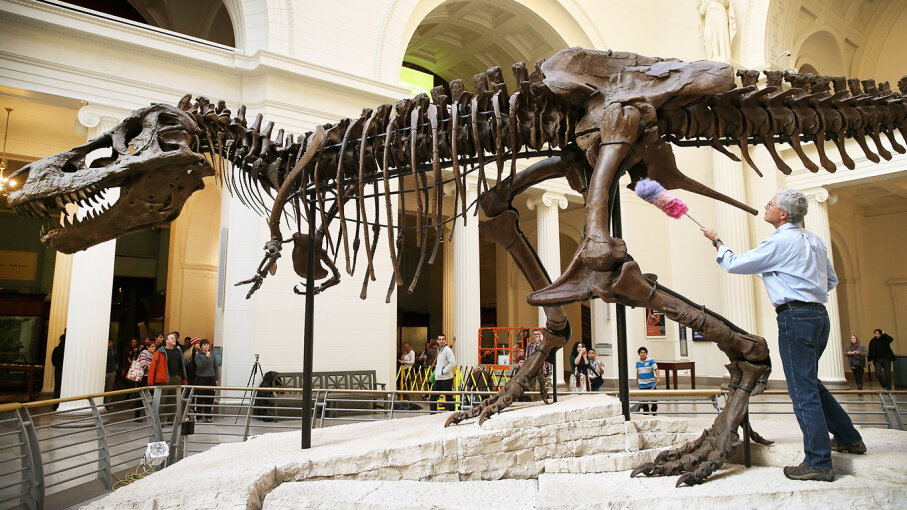 "Whatever the arms are for, they are not for passing potatoes," paleontologist Kenneth Carpenter of Utah State University jokes in an email. He's referring to a gag from Gary Larson's beloved comic "The Far Side." One installment in the series shows a family of Tyrannosaurus sitting around the dinner table. Try as he might, the father dino can't hand off a bowl of spuds to his wife. "Remember," he grumbles, "my forearms are just as useless as yours."

Jokes like that are everywhere these days. With a name that literally means "tyrant lizard king," you'd assume that Tyrannosaurus rex would get a bit more respect. But the giant predator's disproportionately small arms have been the subject of ridicule for decades. They're also a scientific puzzle. More than 100 years after discovery of this species, experts still don't know why a huge animal — one that could reach lengths of 40 feet (12 meters) or more — had forelimbs that weren't much longer than an adult human's.

If the arms were limp, muscle-free pegs, it'd be easy to assume that they served no purpose. However, the evidence hints at a more complicated story. A few studies have argued that, judging by the muscle scars left behind on T. rex limb bones, a full-grown dinosaur could curl more than 220 pounds (100 kilograms) with each bicep. Then again, this isn't as impressive as it sounds.

Thomas R. Holtz, a vertebrate paleontologist at the University of Maryland, tells us that some people like to overrate Tyrannosaurus' upper body strength. "Sure, if you or I could [curl that much], we'd be supermen," he says in an email. Yet, that figure only translates to about 1.25 percent of the dinosaur's total body weight — which may have been in the ballpark of around 8 tons (8,000 kilograms). "That's like a 200-pound (90-kilogram) man being proud of the ability to curl 2.5 pounds (1 kilogram)," he says. "So yes, the arm was stronger than ours, but very weak for the animal itself."

On these grounds, a few experts have concluded that Tyrannosaurus' arms were either functionless or seldom used. But not all paleontologists buy this idea. For his money, Carpenter thinks the little limbs made great hunting tools.

In 2008, he and fellow paleontologist Christine Lipkin compared the fiveTyrannosaurus rex wishbones — or "furculars" — that were known to science at the time. Shaped like a giant boomerang, the furcular sits between the shoulder blades. Modern birds use this bone as a natural spring, one that propels the arms upward during flight. Obviously, big old T. rex couldn't take to the skies. And yet, three of the five wishbones that Carpenter and Lipkin studied show telltale signs of injury. Among these were stress-fractures which must've re-healed in life. By the way, the arm-related maladies of Tyrannosaurus weren't limited to its furculars. One specimen had a humerus ("upper arm bone") whose scars imply that, at some point, a muscle tendon was probably torn loose.

What does this mean? According to Carpenter, the forelimbs "were subjected to a great deal of repetitive stress, which was not uniform or steady. Instead, there were moments of extraordinarily great force applied to the arms," he says. In his mind (and Lipkin's), the most likely explanation is that T. rex used its forelimbs to grab hold of large, struggling prey. A plus-sized, thrashing victim could easily fracture the carnivore's wishbone or at least tear a few arm muscles loose.

Holtz points out that this whole prey-wrangling hypothesis has been complicated by the discovery that juvenile Tyrannosaurus "seem to have had proportionately longer arms" than the gigantic adults did. It's possible that the youngsters clasped onto thrashing prey before they eventually "grew out of" the habit (as Holtz puts it).

Trix, the female Tyrannosaurus rex exhibited at the Natural History Museum in Leiden, Netherlands, was excavated in 2013 in Montana, and is in the top three of the most complete T. rex skeletons in the world.
Dean Mouhtaropoulos/Getty Images

Other ideas about the purpose of T. rex arms have nothing to do with subduing victims. One school of thought involves naptime. Perhaps, after a good night's sleep, Tyrannosaurus used those arms to push itself up off the ground. Or maybe they had a sexier function. Henry Fairfield Osborn, the paleontologist who named this species back in 1905, believed that males used their forelimbs to grab hold of their mates. After all, it might've been hard for a multi-ton, bipedal dinosaur to keep its balance while in the throes of passion.

Alas, as Holtz and others have admitted, there simply isn't enough evidence at this time to conclusively refute or verify any of these notions. Such is often the nature of paleontology.

That said, there is one thing we can say with certainty about Tyrannosaurus' tiny, tiny hands: They weren't an anomaly. Several large, predatory dinosaurs had arms that seemed way too small for their bodies. Indeed, Tyrannosaurus' closest cousins — like Tarbosaurus of Asia and the North American Daspletosaurus — fit this description.

What's more intriguing, though, is the fact that many of the known small-armed dino predators were not close relatives of T. rex. Take Carnotaurus, for example. A bull-horned, South American killer, this animal's arms were so stunted that it probably couldn't even bend its elbows. And yet, Carnotaurus was far removed from T. rex on the dinosaurian family tree. The same is also true of Gualicho, a recently-discovered beast from Argentina whose forelimbs fail to impress in the size department.

In short, we may never know what Tyrannosaurus rex did with those comically short arms. But natural selection favored this trait several times over in disparate lineages of carnivorous dinosaurs. And the reason why is something we've yet to put our finger on.

Now That's Interesting
The Field Museum in Chicago announced on August 30, 2017 that it is taking down and remounting its famous T.rex Sue to make way for the largest-known dinosaur, Patagotitan mayorum. Sue will come down in February 2018 and go up with "changes in her anatomy and stance in a way that embodies the latest understanding of this ferocious Cretaceous Period predator" in her new exhibition hall in spring 2019, museum scientists said.