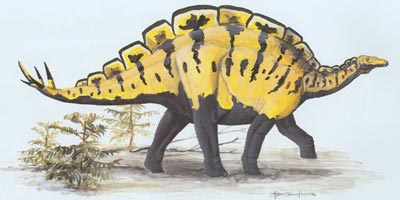 Presently the latest known Chinese stegosaurian, Wuerhosaurus homheni is based on a fragmentary skeleton lacking the skull and on three tail vertebrae of a second animal, all found in the Tugulo Formations near the northwestern part of the Junggar Basin. It was described by Dong Zhiming in 1973. Two armor plates found with the skeleton are thin, long, low, and somewhat semicircular. They are quite different from the tall, triangular plates of other stegosaurians.

Its body was broad, as shown by its wide pelvic bones, and its front limbs were quite short. Although the back limbs have not been found, the shortness of the front limbs shows that the animal had an arch in its back-perhaps even more curved than in Stegosaurus. Comparing bones with those of other stegosaurs shows that Wuerhosaurus was most closely related to Stegosaurus, which is the only stegosaur that had an alternating arrangement of armor plates. Some Chinese paleontologists think Wuerhosaurus may have had alternating plates, but since only two plates were found with the skeleton, there is not enough material to be certain.