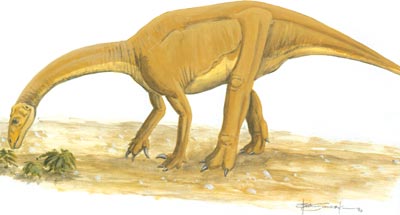 Yunnanosaurus was a long-necked, four-legged plant-eater that lumbered through the fernlike vegetation of southern China. It had over 60 spoon-shaped teeth that sharpened themselves by wearing against each other as the animal fed. This was different from its prosauropod relatives, which had leaf-shaped teeth that wore away against the food that was being chewed. The advanced teeth of Yunnanosaurus were somewhat like those of the sauropods, the dominant plant-eaters of the Middle and Late Jurassic periods. The teeth of Yunnanosaurus probably evolved separately though, because the rest of its anatomy was not like the sauropods. One of the last of the prosauropods, Yunnanosaurus also had a skull that had a different shape than its earlier relatives.

Yunnanosaurus was named after the Yunnan Province in the People's Republic of China. In 1939, Young Chung Chien discovered several partial skeletons and Wang Tsun Yi excavated them. Young described Yunnanosaurus huangi in 1942; it was a smallish animal with a lightly built body. Nine years later, in 1951, he described a second species, Yunnanosaurus robustus. It was a larger, more heavily built animal. After further study of the fossils, it was found that the larger species is actually the adult of the smaller species.

The remains of as many as 20 individuals of various sizes have been unearthed in the Lufeng Formation in the People's Republic of China. After these skeletons have been studied and described, we should soon know more about this dinosaur.