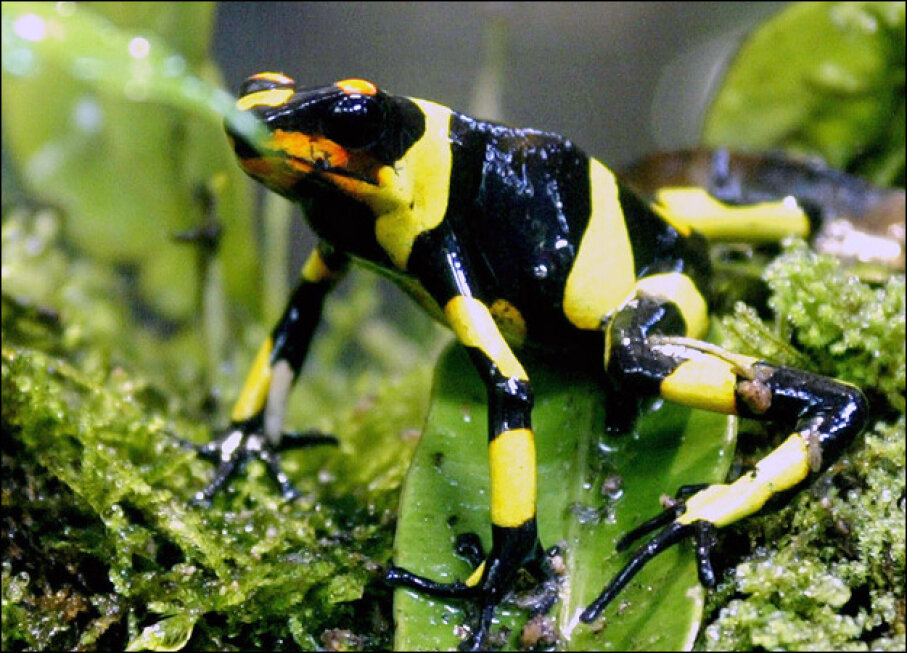 Among the larger species of poison dart frog, the Lehmann's poison frog inhabits the submontane tropical rainforests of Colombia. It spends most of its life on the ground, where it lays its eggs, though it will occasionally perch on low-lying leaves. This frog's bright color bands (red, orange or yellow) warn potential predators that it is highly poisonous. Like other poison dart frots, the toxins in its skin may derive from precursor moleclues in the ants that it eats.

The entire wild population of Lehmann's poison frog lives in two small locations, together equalling roughly four square miles in size. This highly fragmented population is on the brink of extinction. Human encroachment, logging and especially the cultivation of illegal crops — and the associated pollution from the spraying of these crops — are the greatest threats to the Lehmann's poison frog. 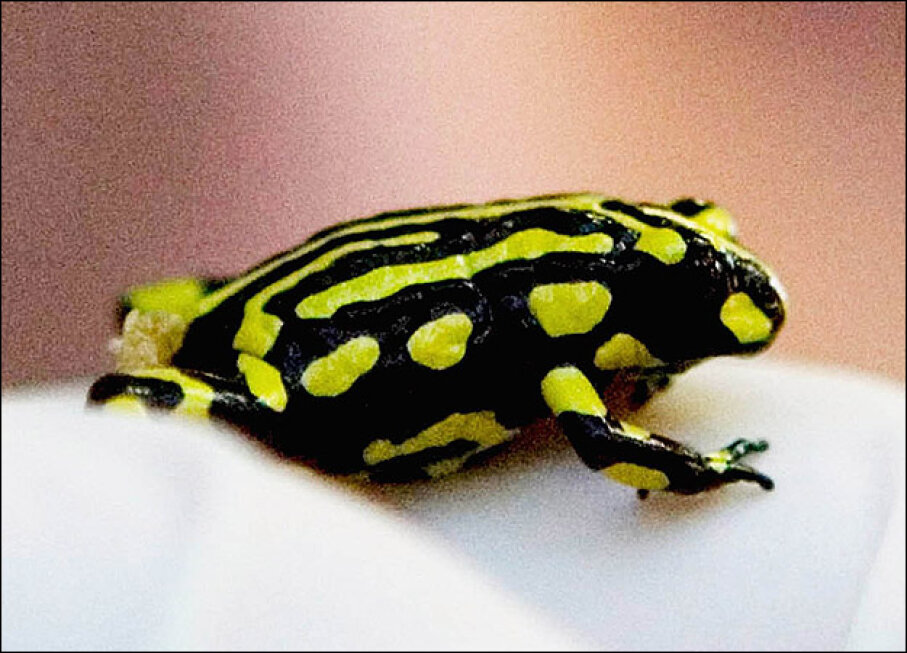 The short, grating "ark" call of the southern corroboree frog is an increasingly uncommon sound that may soon vanish from this world. Only about 250 mature southern corroboree frogs remain in the wild — a tiny number that is declining sharply. It's predicted that, over the next three years, at least 25 percent of this population will vanish, and that most of the rest will disappear over the next ten. The causes are unknown. The chytrid fungus may be a culprit. The planting of exotic willow trees and excavation by feral pigs have helped degrade much of this frog's alpine habitat.

A habitat specialist, this frog prefers montane and sub-alpine woodlands, grassland and heathland above 1,000 meters. In 2002 and 2003, some 90 percent of this habitat was destroyed by bush fires, placing this already critically endangered frog on a grim path to extinction. Note its striking yellow-and-black markings; granular back skin and ridges of warts running down the length of its body. This skin is covered in poisonous secretions produced by the southern corroboree frog itself; this sets it apart from most poisonous frogs, which obtain their toxins from their food. These frogs mature slowly, not breeding until age four, and hibernate in winter wherever they can find shelter. 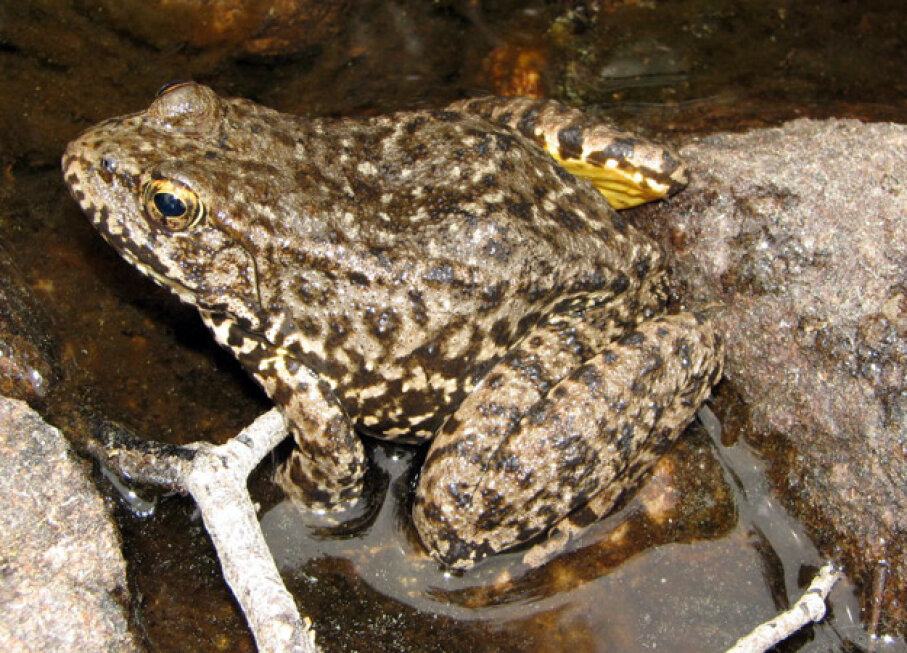 The mountain yellow-legged frog thrives in lakes that are too cold for other amphibians. While this makes them a particularly unique species of frog, it has also recently become their greatest threat. In the early 1900's, California introduced non-native trout populations for gaming in the same lakes, ponds and marshes that the mountain yellow-legged frog lived in. These fish fed on the frogs as well as their tadpoles and their food sources. As the fish are non-native, the frogs have no natural defense.

The frogs are now absent from more than 92 percent of their historic localities in the Sierra Nevada. In Southern California, they are absent from 99 percent of their historic range. No frogs have been seen in the San Bernardino Mountains or on Mount Palomar since the 1970's. The fires of 2003 appear to have destroyed the remaining populations, and they are now considered extinct in the San Bernardino Mountains. Despite concurrent findings by the U.S. Forest Service and the National Park Service of the threat to the frogs, the U.S. Fish and Wildlife Service has yet to list the mountain yellow-legged frog under the Endangered Species Act. 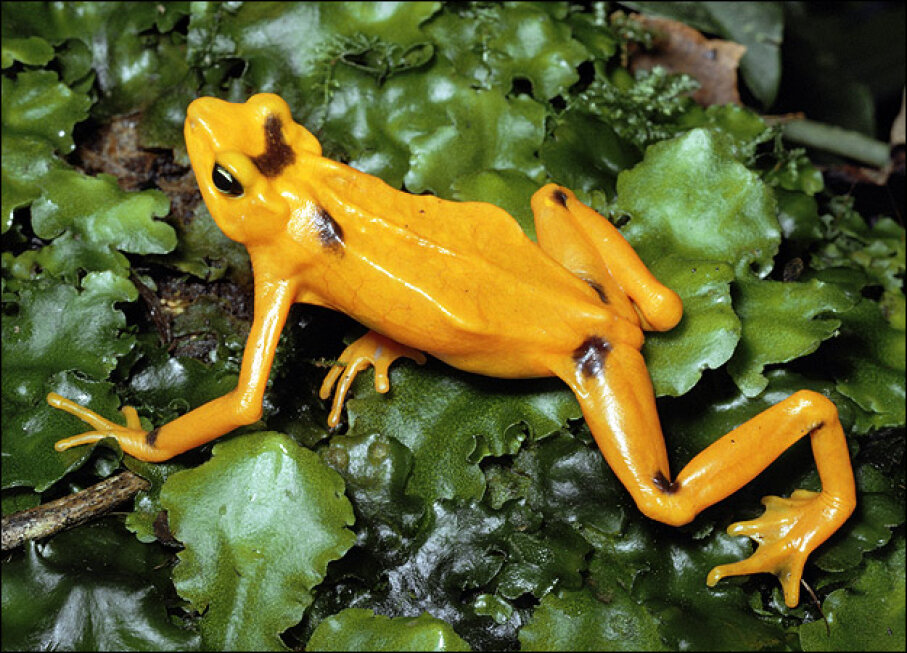 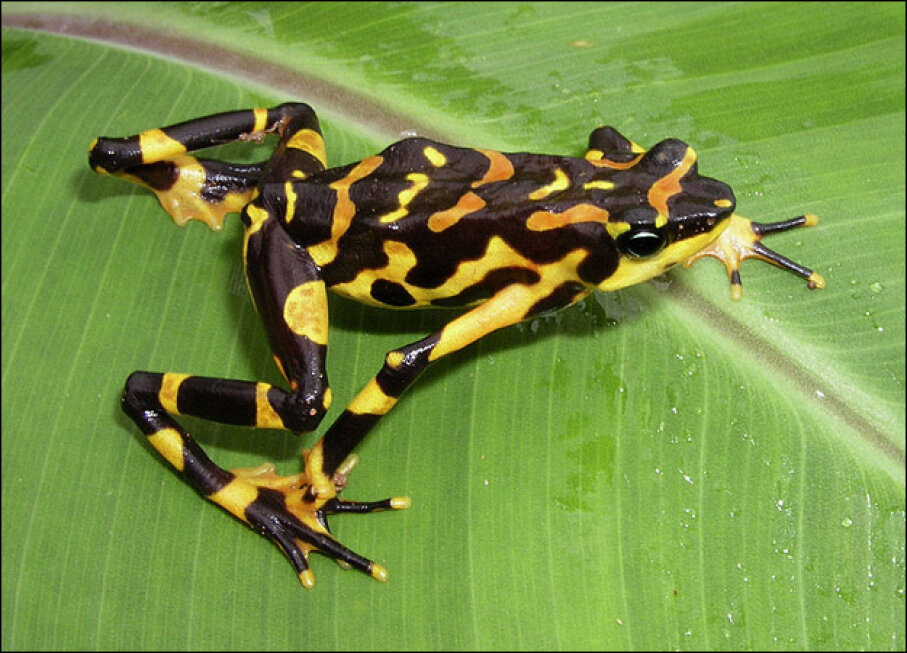 All species of harlequin frogs are named for their bright colors, which are reminiscent of the colorful costumes worn by harlequins in literature and pop-culture. The variable harlequin is usually a shade of yellow or orange with dark markings; the bright colors may prove as a warning to predators of their toxicity. These frogs are poor swimmers, rarely entering streams and relying on splashes for their moisture; they only enter the water for breeding season. The only known predator of the variable harlequin is a species of fly that lays its eggs on the frog's thigh. The fly larvae then burrow into the frog, eventually killing it.

The variable harlequin population is critically endangered in both Panama and Costa Rica. In Costa Rica, experts believed the frog to be extinct until a population was found in 2005; currently, the species is thought to be extinct in Panama. Much of its decline can be attributed to the chytrid fungus.