Browse the article How did the bald eagle get delisted as an endangered species? 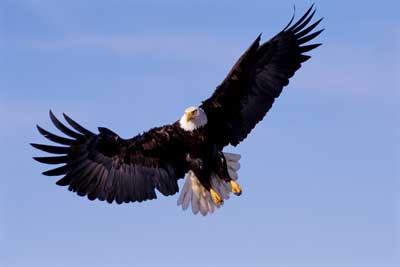 Bird Image Gallery Although Ben Franklin wasn't a fan of the bird, the bald eagle was elected by the Second Continental Congress to be the national symbol in 1782. See more bird pictures.
Joseph Van Os/Getty Images

Benjamin Franklin famously got his feathers ruffled when the Second Continental Congress selected the bald eagle to symbolize the fledgling U­nited States. In a letter to his daughter, Franklin charged that the eagle has a "bad moral character" because it lazily steals food from hawks and is easily frightened when approached by smaller birds [source: Franklin Institute]. Instead, Franklin wanted to substitute the turkey, despite it being "a little vain and silly." At least, he reasoned, the gobbler displayed courage by procuring its own dinner.

Franklin was correct regarding the bald eagles' cafeteria-bullying habits. The birds usually nest near freshwater sources, such as rivers and lakes. While they'll go fishing on their own some of the time, a majority of their diet comes from foraging carrion and snatching meat away from other animals [source: National Geographic]. Eagles prefer fish, but will also eat waterfowl and small mammals on occasion.

In 1782, when the eagle ascended to its position as the national symbol, around 100,000 nesting pairs lived throughout the United States in habitats ranging from Alaska to northern Mexico. By 1963, the U.S. Fish and Wildlife Service estimated that only 417 nesting pairs remained in the lower 48 states. The government's efforts to protect the dwindling avian species began in 1940 with the passage of the Bald Eagle Protection Act, which made it a crime to take or sell the eagles. But it would take 40 years of concerted bald eagle conservation efforts to usher the species back from the brink of extinction. 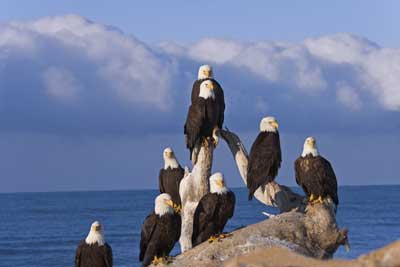 Bald eagles in Alaska were never endangered like the ones in the lower 48.
Karen Su/Getty Images

As people settled throughout the Western half of the United States, some bald eagle habitats were destroyed in the process. Eagles prefer not to live near humans, instead selecting tall, mature trees near water for nesting. Because the bird of prey's diet may include livestock such as chicken and lamb, some farmers and ranchers hunted bald eagles to protect their farms [source: U.S. Fish and Wildlife Service].

The bald eagle (Haliaeetus leucocephalus) population received the biggest blow from the environmental prevalence of a chemical pesticide called Dichloro-diphenyl-trichlorethane (DDT), which seeped into freshwater supplies. This meant that fish swimming in the polluted waters would absorb the chemical. From there, eagles would ingest the fish and effectively consume the poison. Once in their bloodstreams, DDT caused females to produce eggs with shells too thin to protect the embryo. Since the hatchlings couldn't survive, the number of bald eagles shriveled accordingly. Rachel Carson's 1962 book "Silent Spring" about DDT's harmful environmental effects helped bring about the ban on the pesticide's use in 1972.

In 1967, bald eagles were added to the endangered species list. That designation offered the eagles more habitat protection from development and made it illegal for anyone to kill them. The U.S. Fish and Wildlife Service headed the repopulation efforts through programs like breeding a colony in captivity at the Patuxent Wildlife Research Center in Maryland [source: U.S. Fish and Wildlife Service]. By monitoring the growth of that group of bald eagles and eventually releasing them into the wild, the species began to rebound. The agency divided the country into five regions to manage the revitalization [source: U.S. Fish and Wildlife Service]. Then, in 1995, the government transferred bald eagles in the lower 48 states from endangered to threatened classification. Threatened status means that a species is no longer in immediate danger of extinction but still needs protection.

Although they were designated as threatened, strict rules regarding the eagles' habitats persisted. For instance, the general rule for building around an eagle nesting site is that it can't come within a 330-foot (100-meter) radius [source: Slevin]. That restriction hampered Minnesota resident Edmund Contoski's plans to develop his lakefront property. Frustrated, he filed a federal lawsuit in 2005 challenging the restriction [source: Slevin]. Contoski won his case on the basis that the eagle's population had reached a level where it no longer should be considered threatened, paving the way for the eagle's removal from the endangered species list.

On June 28, 2007, the Interior Department officially declared the bald eagle to be fully recovered and delisted. At that time, an estimated 9,789 breeding pairs lived in the continental United States, representing one of the most dramatic population improvements for an endangered or threatened species [so­urce: ­U.S. Fish and Wildlife Service]. Major conservationist groups including the National Resources Defense Council and the National Wildlife Federation approved of the motion as a celebration of the conservation efforts. There have been a few setbacks for this bird of prey recently, as Arizona's U.S. District Court reversed the delisting for bald eagles in that region, reclassifying the Sonoran Desert bald eagle as a threatened species [source: U.S. Fish and Wildlife Service]. However, the U.S. Fish and Wildlife Service maintains protectionist policies to help ensure that the remaining bald eagle population doesn't plummet.