Does Goodbye to the Last Male Northern White Rhinoceros Mean the End of the Species?

Browse the article Does Goodbye to the Last Male Northern White Rhinoceros Mean the End of the Species? 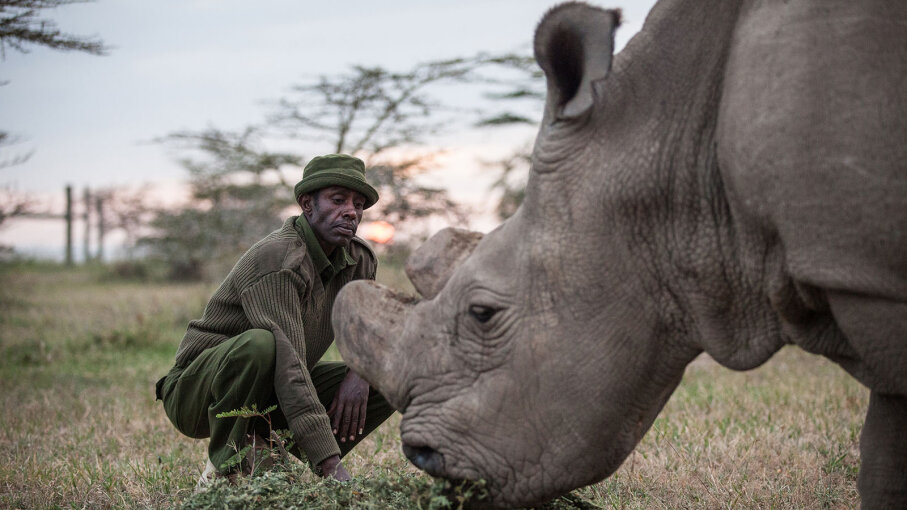 Sudan, the last male northern white rhinoceros, died on Monday, March 19, 2018. He's pictured here in 2015, with one of his 24-hour guards. Nichole Sobecki for The Washington Post via Getty Images

Beginnings and endings are often met with fanfare. But not always. For instance, the world's very first white rhinoceros (Ceratotherium simum) probably diverged from its relative, the black rhinoceros (Diceros bicornis), around 7 million years ago without too much of a fuss. However, on Monday, March 19, 2018, Sudan, the last male northern white rhino in existence was euthanized at the ripe old age of 45 due to poor overall health and a nasty leg infection. He lived out his final years in Kenya's Ol Pejeta Conservancy with the only other two of his kind — his daughter, Najin, and granddaughter, Fatu. For this rhino, at least, we stand on ceremony.

Sudan was the last male of one of two subspecies of white rhinoceros native to the grasslands of central and southern Africa. The two forms of white rhino are subtly different — the northern form of the species is smaller, with different dental structure and shaggier ears and tail than its southern counterpart, and some scientists have even argued that they should be classified as different species, based on their genetic and morphological differences. Be that as it may, the southern white rhino has done much better for itself in the past 50 years than its northern counterpart, with recent numbers approaching 20,000 individuals compared to the two lonely females we're left with after Sudan's passing. The saddest part may be that Sudan and his northern brethren weren't driven to the brink of extinction because they were simply bad at being rhinos. (Spoiler: It was OUR fault!)

Northern white rhinos were relatively common not so long ago — in 1960, around 2,000 of these gentle giants lived in their native range, which includes Chad, Uganda, Sudan, the Central African Republic and the Democratic Republic of the Congo. Because of where they lived, in the 1980s they found themselves casualties of a war that raged in their native territories during that time. The poaching pressures on northern white rhinos during this time were astronomical, and a few thousand animals were quickly whittled down to around 20, most of which were held by zoos around the world.

And now the last male has died. So, what does that mean for the future of the northern white rhino? Well, it's not looking good, but all is not lost. While neither Najin nor Fatu has been deemed able to carry a baby to term, over the years, sperm has been banked from northern white rhino males not related to either female. Scientists are hoping to use in vitro fertilization to fertilize the eggs of the two females and implant them into southern white rhino female surrogates. Although in vitro fertilization is commonly successful in humans and cows, it hasn't yet succeeded with a rhino.

It will obviously require heroic, and perhaps ultimately fruitless, efforts to save the northern white rhino, but maybe the endeavor will lead to breakthroughs that will save even a few of the thousands of species currently facing extinction.

Now That's Interesting
Until his death, Sudan was attended by a platoon of armed guards who protected him from poachers.