by Christopher Hassiotis May 9, 2016
Across the world, leopards have lost three quarters of their historic range, according to new research. Wolfgang Kaehler/Getty Images

Leopards no longer inhabit as much as 75 percent of the big cat's historic range, according to a new global analysis. The newly published paper in the journal PeerJ is the first of its kind, analyzing 1300 different sources to determine the past range and current status of all nine leopard subspecies across their entire range.

One of the more troubling pieces of information coming out of the comprehensive study is that — though we don't know the total number of leopards left in the wild — leopard populations are not declining evenly across all geographic locations, and some specific subspecies are experiencing drastic drops in population, with three almost completely eliminated. Specifically, the leopard habitat in much of the Arabian Peninsula, China and Southeast Asia has declined by nearly 98 percent.

Leopards can survive in human-dominated area if they have enough cover and access to wild prey, but habitat converted to farmland or city robs leopards of what they need to survive. The study also found that high-profile encounters between humans and leopards can give people the wrong idea about how many big cats there are.

"Leopards' secretive nature, coupled with the occasional, brazen appearance of individual animals within megacities like Mumbai and Johannesburg," said Luke Dollar, a study co-author and program director of the National Geographic Society's Big Cats Initiative, in a press release accompanying the paper's publication, "perpetuates the misconception that these big cats continue to thrive in the wild — when actually our study underlies the fact that they are increasingly threatened."

It's not just habitat loss that accounts for what threatens the world's leopards. Decline in prey populations and conflict with livestock owners have contributed to a drop in population, as have the  illegal trade in leopard skins and parts and legal trophy hunting.

A man sells leopard skins in Mogadishu, Somalia. Leopards are endangered in that region of Africa.
Mohamed Abdiwahab/Getty Images

The paper points out that some areas of the world have had successful conservation campaigns that have stabilized leopard populations, like in the Caucasus Mountains or the remote borderlands between Russia and China.

"The international conservation community must double down in support of initiatives protecting the species," Philipp Henschel, a co-author and survey coordinator with wild cat conservation grou Panthera. "Our next steps in this very moment will determine the leopard's fate."

Now That's Cool
After a three-year hunt, researchers in February captured captured of the only jaguar known to roam wild in the United States.

The Two Basic Steps to Put Your Own Face on U.S. Money 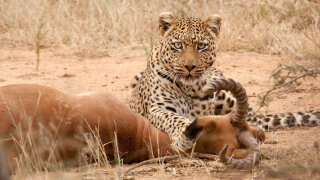 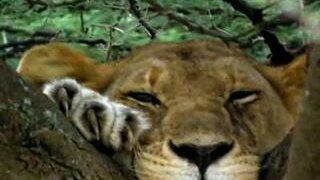 Why does Apple name its OSs after big cats?