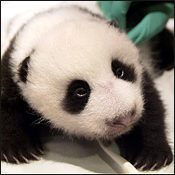 Mei Xiang and Tian Tian's cub, Tai Shan, was born at the Smithsonian's National Zoo in Washington, D.C., on Saturday, July 9, 2005, at 3:41 a.m. He entered the world blind, pink and nearly hairless. Next to his 250-pound mother, the quarter-pound cub — about the size of a stick of butter — was a peculiar sight.

Mei Xiang was baffled by the cub at first, but within minutes instinct kicked in and she began cradling and cuddling the newborn. For the next month, mother and cub were inseparable. Tai Shan was very vocal, squawking whenever Mei Xiang switched positions and squealing when hungry. Mei Xiang was entirely focused on keeping the newborn safe, clean and well-fed, even refusing food and water at first. The zoo gave the pair its privacy, hoping with bated breath that the cub would survive, and rejoicing over each passing milestone.

On Tuesday, Aug. 2, Mei Xiang left Tai Shan for the first time to forage in the nearby indoor exhibit. Zoo staff took the opportunity to examine the cub and were excited to find that he was a strong, healthy male. Staff continued to examine Tai Shan periodically over the next several months as he developed strong teeth, a thick coat, a big round belly and the motor skills he would need to survive.

On Monday, Oct. 17, Tai Shan turned 100 days old and — in accordance with Chinese tradition — received his name, which means "peaceful mountain." A total of 202,000 people voted in the naming contest, with "Tai Shan" earning 44 percent of the vote. Besides the United States, votes were cast from several countries including China, Poland, Brazil and New Zealand.

Why Goldfish Make Their Own Alcohol
10 Amazing Things Dogs Can Sense
What do most sharks eat?