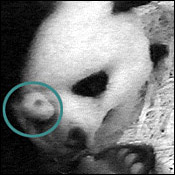 On July 15, Mei Xiang left her cub for the first time to get a drink of water, returning to it three minutes later. The cub looked larger and its belly was round, indicating that it was healthy and had been nursing frequently. Whenever Mei Xiang left the nest, the cub stayed very quiet. This may be an adaptation to life in the wild, where a noisy cub could fall prey to a carnivore on the prowl.

Over the next several days Mei Xiang would leave her cub more frequently to drink, though she continued to resist the need for food. When she was away, zoo staff began to see little black patches around the cub's eyes. Over the next week, its eyes, ears, shoulders and hind legs began to darken, and its silvery hair began to lengthen. These were the first signs of what would become the little panda's distinctive black-and-white coat.

As the days marched on, Mei Xiang frequently placed the cub down in the hay to examine it or lie beside it for a few minutes before picking it up again. At one point, the cub seemed to be trying to crawl. Even at this early stage, he was far ahead of the curve for panda cubs.