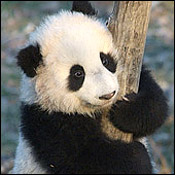 At 7:15 a.m. on December 22, Tai Shan discovered the great outdoors. After playing on the scale that separates the outer and inner enclosures for a good 10 minutes, he ventured into the sunshine for the first time. He cautiously crept along the back wall of the building, then shadowed the fence line as he made his way down to the yard. Along the way he discovered fresh gravel patches and, when he reached the yard, grass.

With very deliberate steps, Tai Shan made his way to the large fallen limb in the middle of the yard. There, he lost himself in play, hanging from the branches while Mei Xiang tried to pull him off. Later he discovered his first living tree, which he climbed as far as the protective metal sleeve meant to keep pandas from reaching the upper branches. He also walked all the way to the bottom of the dry moat and back again.

Tai Shan's outdoor excursions became a regular occurrence from this day forward. At first he followed the same path — along the building wall, down the fence line and to the fallen limb — but eventually tried different avenues of approach to his newfound playground.