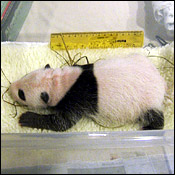 On July 26, Mei Xiang left the cub for six minutes to drink and eat some bamboo. This is the first food she'd eaten since two days before giving birth. In summer, giant pandas go through a metabolic shift to coincide with when they produce cubs. Their food intake may decrease by up to 75 percent during this time.

At 8:10 a.m. on August 2, Mei Xiang left the den for several minutes to eat and drink as part of her new routine. Keepers closed the den door, and — after observing no reaction from Mei Xiang — took the opportunity to give the cub its first exam. Zoo staff were delighted to discover that the cub was a male. He weighed 1.82 pounds and measured 12 inches from the tip of its nose to the tip of its tail. His heart rate and respiration were normal, and he felt very solid and sturdy. The cub was very quiet during the exam, letting out only a single squawk when his mouth was examined.

Mei Xiang was very anxious during the exam. She stood up, pawed at the den door and attempted to open the window. When the door was reopened, Mei Xiang quickly retrieved her cub, examined him, then settled down for a long, comfortable nap.