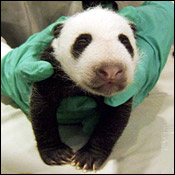 The cub was examined again on August 9, at which time he weighed 2.6 pounds and measured 14.5 inches. He was relatively quiet during most of the exam. He made soft sucking noises like he wanted to nurse, but toward the end of the exam he began to squeal. This caused Mei Xiang, who was on the other side of the den door, to become very agitated. Unable to get to her cub, she ran in circles around her enclosure and produced several sharp, high-pitched barks. The two were reunited soon after, and they settled down quickly for a nap.

On August 18, vets noted an eye blink response during the cub's third exam, though he had yet to open his eyes. A gum ridge was present, but no teeth had poked through.

The cub became more alert and active by the day. He began reacting to sounds, lifting and bobbing his head whenever the den door was opened or closed. He also learned to right himself from a side position and to flip over onto his belly. On August 20 he was seen trying to lift his entire body with his four legs, and several days later he used his hind legs to push up closer to Mei Xiang. These were the first signs of the cub's developing muscle coordination.