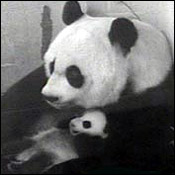 On August 25 the cub opened its eyes for the first time, a huge milestone. He was also seen lifting his head in response to Mei Xiang's vocalizations and movements, and even orienting his head toward her. This was a sure sign that he could hear.

The cub's muscles continued to develop daily, and as a result his movements became more and more directed. To demonstrate his newfound dexterity, the cub started rubbing his hind feet together and occasionally scratching his fore leg with his hind leg. His attempts at crawling became more purposeful, and by September 3 he was able to lift his head and chest off the ground and drag himself forward. True crawling, however, was still just out of reach as the cub was still unable to lift his lower half; instead, he'd half-crawl in circles before tiring out and falling fast asleep.