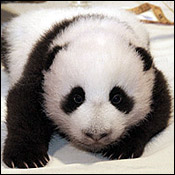 At the cub's fifth health exam on September 8 he received his first distemper vaccination. He weighed 7.5 pounds and measured just over 21 inches. He was very active during the exam, doing pushups and trying to crawl on the table. He even lifted his entire body on all four legs, a first. The buds of his teeth were felt beneath the gums, but so far none had broken through.

The cub continued to grow, which made it harder for Mei Xiang to handle him. She was forced to use her mouth and both paws to flip the cub over while giving him one of her frequent tongue baths.

On September 21, the cub took his first step. He lifted himself up on all four legs, began to sway, took a sudden step forward and then fell on his face. After all the effort he immediately fell to sleep. He continued trying to stand and walk over the next couple weeks to varying degrees of success.