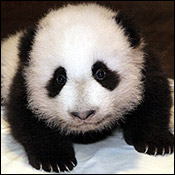 A quick exam on October 4 revealed that the cub's incisors and molars had erupted through the gum line. A week later his canines had erupted through. As an adult, he won't find much use for his canines, as pandas are strict vegetarians, but his incisors, molars and premolars will see plenty of action; these are used together to strip leaves from bamboo stalks, break the stalks into pieces and mash them into a pulp that can be easily swallowed.

All the cub's attempts to walk finally paid off as he began to walk frequently and confidently. As soon as he got this skill down, he was off to learn another. On October 16 he showed the first signs of play behavior when he swatted at Mei Xiang's nose with his paw several times.

On October 17, the cub turned 100 days old and received his official name: Tai Shan, which means "peaceful mountain" in Chinese. The world-famous panda was oblivious to the fanfare and slept through most of the ceremony.