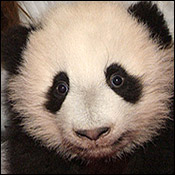 Tai Shan was seen mouthing a narrow stem of bamboo on October 19, something that the keepers had not expected to see for at least a month or so. He did so for several minutes, using the front and side of his mouth like an adult panda. Tai Shan will continue nursing past his first birthday, but bamboo will slowly become a more important part of his life hereafter.

Zoo staff began placing Tai Shan in the indoor exhibit enclosure to get him used to being outside the den. This didn't sit well with Tai Shan for the first month; as soon as he was placed in the enclosure, the cub would march himself directly back to his cozy den.

Tai Shan was also seen playing more frequently with Mei Xiang. She would roll the cub around in her arms while gently biting his neck and ears, and Tai Shan would respond by biting back, swatting at her face and kicking vigorously.