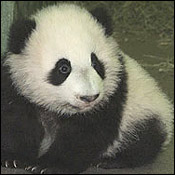 While the keepers had trouble convincing Tai Shan to explore the world outside his den, Mei Xiang was able to do so with little effort. When keepers arrived on the morning of November 5 they found the pair in the exhibit enclosure independently exploring their surroundings. From this point onward, Mei Xiang began regularly taking Tai Shan with her into the exhibit enclosure. Sometimes she'd leave him on the rocks for a few minutes, bleating every so often to make sure everything's alright.

Within a matter of weeks Tai Shan was exploring both enclosures, climbing in and out of the dry pools, rolling in the hay while chewing his feet and trying to sit up against the rocks without falling over. As his upper body became stronger, he was able to pull himself onto a 2-foot ledge in one of the dens and later up onto the rocks, where he found an old stump that became a favorite toy for many weeks.

Tai Shan spent most of his playtime alone at this stage, as Mei Xiang remained outside for a good part of the day feastingon bamboo. He continued practicing with bamboo, sometimes sitting up and holding it while mouthing the stalk — the exact position adults take when feeding. With his mouth around the leaves he'd pull the bamboo from one side of his mouth and out the other, the stalk firmly grasped between his pseudo thumb and claws. This behavior may be genetically programmed, as he'd rarely if ever witnessed Mei Xiang eating bamboo.