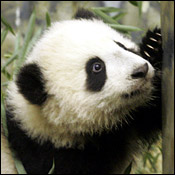 On November 29, Tai Shan made his media debut. More than 100 reporters from over 50 media outlets as far away as China, Japan and Russia came to see the world-famous cub. Tai Shan showed off his climbing skills, walked along the edges of rock ledges and drank from a newly discovered trickle of water while the cameras flashed and the reporters "oohed" and "aahed."

Tai Shan's awareness of his surroundings increased by the day. He discovered the joys of playing with leaves and toys, such as soccer balls and kongs. When those games became boring, Tai Shan always had his favorite old wooden stump to play with.

On December 8, Tai Shan made his public debut. He played, climbed rocks and scaled the miniature "mountain" in his enclosure before carefully picking his way back down. A week later, an extremely playful Tai Shan weighed in at 23.3 pounds and measured 36.6 inches.