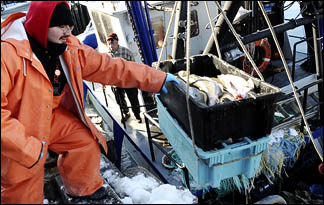 In the simplest terms, overfishing is a non-sustainable use of the oceans, triggered by catching too much of a particular type of fish, which leads to an overall degradation of the system. Across the globe, fishing fleets are now two to three times larger than what our waters can sustain and support, and on top of that, some fishing methods have a domino effect of sorts, with practices and gear causing destruction on species that aren't even the primary target.

There are many ways to make a difference and help curb this crisis, from sharing information about the issue with family and friends to reaching out to your elected officials and asking for their support. If you do eat fish, find out which popular seafood choices have less of an impact on the system, and which ones to avoid by using our guide below.

AVOID: All imported, wild-caught (including beluga, osetra and sevruga)

Though often associated with the rich and famous, caviar is nothing more than salted sturgeon eggs. However, the majority comes from the Caspian Sea, where sturgeons are in grave danger of extinction as a result of overfishing and water pollution. As a result, the U.S. has banned the import of beluga caviar among others, but if you still need a "champagne wishes and caviar dreams" fix, opt for U.S.-farmed white sturgeon and paddlefish instead.

Native to the Pacific coast, Dungeness crabs are considered to be the most eco-friendly option, as they are caught with traps that allow fishermen to release any bycatch unharmed. Additionally, Dungeness crab fisheries employ a comprehensive management system, allowing capture of only mature males of a certain size in order to protect and sustain future populations and supply. While U.S. king crab fishing is well managed, batches imported from Russia continue to wreak havoc on the environment and should be avoided.

Contrary to popular belief, the Chilean seabass is not really a bass and not always caught in Chilean waters. Increasing demand in restaurants for this white fleshy fish has contributed to the widespread illegal and unregulated overfishing issues, not to mention bycatch repercussions, particularly for the endangered albatross.

Sorry, unagi lovers, but most freshwater eel is served in the sushi market is prepared using the anguilla japonica species, which is endangered. Farming can cause serious environmental pollution, as waste from net pens and ponds is not treated for discharge. This practice is also dependent on wild-caught juvenile or glass eels, which may be contributing to declines in wild populations as well. The U.S. maintains a small eel fishery that generally targets adult eels. The glass eel fishery in the U.S. and Canada is extremely limited and subject to careful regulation and science oversight.

There are 13 different species of flatfish, the most popular of which include flounder, halibut and sole. The easiest rule of thumb to keep in mind is to choose Pacific over Atlantic, the latter of which has been plagued with the repercussions of overfishing issues for decades. Also, beware of California halibut caught by gillnets, which creates a number of bycatch-related issues. It's often simply labeled as "halibut" and therefore mistakenly believed to be Pacific halibut, which is the best eco-friendly choice among this type of fish.

More than 70 different types of rockfish live off the Pacific coast of the United States, the majority of which are vulnerable to overfishing because they mature at a late age and are often caught before they've had a chance to reproduce. While populations in Alaska and British Columbia are currently healthy and abundant, along with black rockfish from the Pacific Northwest region, other types have a long way to go before recovering. Additionally, bottom trawling is the most commonly used method for procuring many varieties, including Pacific and red snapper, a method that causes significant habitat damage.

AVOID: All farmed (including Atlantic)

Salmon has become one of the most popular seafood choices on the menu, but not all are created equal. Hands down, Pacific salmon from Alaska represents the best of the best in terms of fishery management and monitoring, with freshwater habitats that have remained relatively pristine. On the contrary, farmed salmon (commonly sold as Atlantic salmon, with 90 percent imported from Canada and Chile) contributes greatly to a number of environmental hazards, including water pollution and disease.

Bay scallops are smaller in size and primarily come from aquaculture farms in China, where they are produced via suspension culture and therefore have a relatively low impact on the environment. Sea scallops are larger and often used when making sushi (known as "hotate"), but usually caught by dredging, which can cause extensive damage to the seafloor habitat, making farmed scallops the better choice.

AVOID: All imported (including tiger prawns)

Most shrimp are caught by trawling, a practice that yields the highest bycatch levels of any commercial fishery. However, pink shrimp from Oregon, often used in salads or sandwiches, employs trawl configurations and devices that are the least damaging, making this variety the best choice. Northern shrimp farmed in the Canadian and U.S. Atlantic regions can also provide a reasonable alternative, as many fishers adhere to laws limiting environmental impacts. However, imported catches, both wild-caught and farmed, should be avoided altogether as their practices contribute greatly to pollution and habitat loss.

AVOID: All longline-caught (including ahi)

When caught by troll or pole-and-line, particularly in British Columbia and Hawaii, albacore tuna is the most ocean-friendly option. However, longline catches should be avoided, as this method can result in the bycatch of many other endangered or threatened species, such as sea turtles, sharks and seabirds. The same rules apply to yellowfin tuna, which fishery managers generally consider to be at healthy levels of abundance. When caught via troll/pole fisheries, bycatch for yellowfin tuna is usually minimal, as compared to longline hauls that yield more damage.

To find out more about overfishing, check out The Blue Ocean Institute's Guide to Ocean Friendly Seafood or the Monterey Bay Aquarium's Seafood Watch Web site.

Why Does My Home Become Infested with Gnats in the Summer?
Do Dogs Know They're Being Photographed?
Do rhinos really stomp out fires?