Shark Finning - The Big Picture of a Big Problem 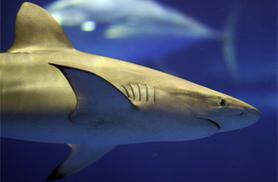 Sharks on the brink Photo by Erik Charlton
DCL

Watch maritime crews off the coast of New Zealand fight poachers and other wrongdoers on the high seas in an exciting new season of Coastwatch, premiering Fridays at 8/7c on Planet Green.

Shark finning is a brutal practice. A shark is caught, pulled onboard a boat, its fins are cut off, and the still-living shark is tossed back overboard to drown or bleed to death. The wasteful, inhumane practice is done to satisfy a demand for shark fins, which can fetch as much as $300 per pound. The meat, on the other hand, is far less valuable, so fishermen toss it overboard to save space for more fins.

Not only is it an intensely wasteful and harmful practice, it's also essentially pointless since shark fins have no nutritional or medicinal value. And they're practically flavorless. Yet, finning continues, to the point that these animals so vital to the ecological balance of our oceans are about to be wiped out completely.

What's So Great About Shark Fins?

Really, nothing. They have no nutritional value and are practically tasteless. When it comes to shark fin soup, all the flavor comes from the broth. The fins are added just for texture and novelty. The shark fin is merely a status symbol and a mark of tradition.

Still, shark fin soup is part of Asian culture, particularly in China, as a meal eaten during celebrations among the wealthy. But with China's economy rapidly growing, more people can afford to buy this symbol of a luxurious life and the demand for shark fins is increasing. Unfortunately, it is increasing in conjunction with a serious decrease in shark populations globally.

How Serious A Threat is Shark Finning?

Finning is responsible for the death of between 88 million to 100 million sharks every year. Exact numbers are unknown because the practice is illegal in many places and hauls aren't accurately counted. Because sharks are at the top of the food chain and have few predators, they reproduce and mature slowly. That means their numbers are slow to replenish when a population is overfished. At the rate humans are going, we're set to wipe out sharks entirely in as little as 10-20 years.

[b]Sharks: A Bleak Future Ahead (Slideshow)

What Happens If Sharks Die Out?

Sharks are an apex predator. Apex predators are invaluable for keeping the populations of everything else in the food chain in balance. The oceans depend on them to keep the numbers of other fish and mammal species in check and weed out the sick, injured and dying so that populations of fish stay strong and healthy. Without sharks -- from bottom feeders all the way up to Great Whites -- the balance of the ocean's food chain is in danger.

This is not just a guessing game, either. We've already seen the impact a loss of sharks can have on an ecosystem. According to Shark Savers, a scientific study conducted in the mid-Atlantic part of the United States showed that when 11 species of sharks were nearly eliminated, 12 of the 14 species those sharks once fed on became so plentiful that they damaged the ecosystem, including wiping out the species farther down the food chain on which they preyed. The negative effects trickle out as the ecosystem gets thrown out of balance.

Everyone from celebrities like Yao Ming to politicians like John Kerry all add their voices to the fight against shark finning. But while their help gets the issue into the public eye, activists at the docks are going a world of good exposing fishing practices and markets that bolster shark finning. Randall Arauz won a Goldman Environmental Prize for his work in showing the extent of the damage done to shark populations on Costa Rica and getting policies changed that favor sharks, at least to some extent.

The real activism comes with ending a market for shark fins -- something incredibly difficult to do since shark fin soup is an embedded part of Chinese culture worldwide.

Are There Laws Against Shark Finning?

There are some laws in some areas worldwide, but ultimately, they're incredibly difficult to enforce.

The 2000 U.S. Shark Finning Prohibition Act restricts shark finning in all federal waters and both coasts. It also calls for an international effort to ban shark finning globally. The first international ban on finning was instated in 2004 with sponsorship from the United States, the European community, Canada, Japan, Mexico, Panama, South Africa, Trinidad (Tobago) and Venezuela, and support from Brazil, Namibia and Uruguay. This international ban, however, has proven to be more posturing than action since only the U.S., Canada, Brazil, Namibia, South Africa and the European Union (EU) have actual laws in place.

Much of the problem surrounding laws with shark finning is enforcement. If a country sees fit to create a law, they have to then somehow come up with the resources to monitor the oceans over which they have jurisdiction, and to punish those who break the law. Some countries just simply don't have the resources.

Beyond the shores, laws can help by curbing access to the fins that are sold. For instance, Hawaii has outlawed selling shark fin soup. Difficulty in getting the soup decreases demand, which decreases the selling price and makes finning less attractive of an option to fishermen. But again, the product is such an embedded part of Asian culture that decreasing demand is about as difficult as monitoring all the fishing boats on the ocean. Not impossible, but difficult.

Arauz stated, "Shark finning is not only cruel, it is irresponsible and unsustainable fishing at its highest degree. In spite of this, it has been close to impossible to attain any international binding management and conservation measures to curtail this practice."