by Christopher Hassiotis Jul 20, 2017
New Mexico resident Jude Sparks poses near the Stegomastodon skull he discovered in 2016. Researchers excavated the fossil find in May 2017 for study and preservation. Peter Houde

Imagine you're 9 years old again. You're on a hike with your family, exploring rocky crags of a desert landscape not too far from the U.S.-Mexico border. You run ahead of the group, hoping to get out of sight so you and your brothers can test out your walkie-talkies. As you're jogging, you trip on what looks like a rock. Looking up from the dust, you're face to face with a massive jawbone protruding from the desert ground.

That's precisely what happened to Jude Sparks, who literally stumbled onto a 1.2-million-year-old fossil find last year. When the Sparks family returned to their Las Cruces, New Mexico, home after their hike, they turned to the internet to look for advice — and found New Mexico State University (NMSU) biologist Peter Houde in a YouTube video discussing a similar fossil find a decade ago.

In May, Houde and a team of NMSU scientists retrieved a fossilized skull (mostly intact), jawbone and tusks identified as belonging to a prehistoric giant animal called a Stegomastodon, one of three species of animals from the order Proboscidea that lived in the Rio Grande Valley region during the Pleistocene era. (The only living proboscideans today are elephants.)

"A Stegomastodon would look to any of us like an elephant," said Houde in a press release announcing the retrieval. "For the several types of elephants that we have in the area, this is probably one of the more common of them. But they're still very rare. This may be only the second complete skull found in New Mexico."

The weeklong extraction process happened several months after the initial discovery due to its location on private property, and the delicate nature of the fossilized skull.

"As we were brushing away the fossil as soon as we removed the sediment," said NMSU geology student Danielle Peltier, "we needed to put a type of hardener on there to preserve the structural integrity, otherwise it would just crumble after a few days being left in the sun."

Once the complete fossil, which weighs more than a ton, was unearthed, researchers took it to their research lab for study and reconstruction.

"I have every hope and expectation that this specimen will ultimately end up on exhibit," said Houde, "and this little boy will be able to show his friends and even his own children, look what I found right here in Las Cruces."

As for Jude Sparks, now 10 years old, his interest in fossils has been reinvigorated. "I'm not really an expert," he told The New York Times, "but I know a lot about it, I guess."

Learn more about the discovery, the excavation and the preservation processes in this NMSU video:

Now That's Interesting
In 2015, a farmer in Michigan found the complete skeleton of a Jeffersonian mammoth while plowing his fields. Those remains were only 15,000 years old.

Is the 'Blue Whale' Online Game Pushing Teens to Suicide? 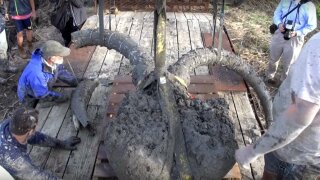 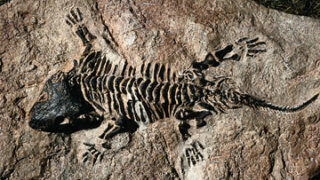 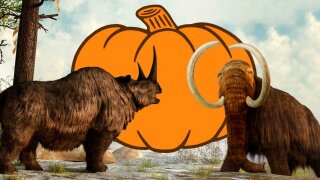